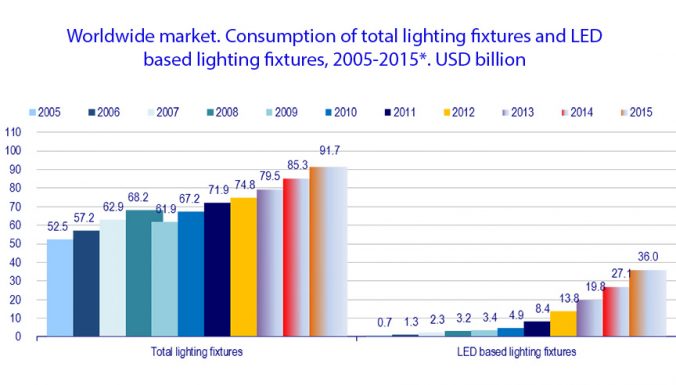 Internationally speaking, where does Italy stand with regards to illumination? For many years Italy was the top exporter in the lighting industry, but in the 1990s China overtook us, followed later on by Germany. In terms of trade balance, seeing as Germany is also a major importer, Italy ranks second place when you consider the export/import balance.

Without a doubt the most important change was that from traditional light bulbs (incandescent, fluorescent) to LED (and in the long run OLED). With annual growth rates that exceed 30%, LED was practically unknown on the market ten years ago. The current growth rate is 25%, but over the course of the next few years it will probably reach 40%. There are other exciting novelties to follow as well, like the strong expansion of e-commerce as a retail channel, for example.

Urban lighting: the importance of materials

Efficiency of public lighting is more than a topic debated: spending reviews, downsizing consumption forced, austerity regime, decrease power on hours, technological upgrading through more efficient sources and monitoring systems are the major topics being debated today in the…

Turning the spotlights on healthy food: Korea’s pavilion at Expo

"You are what you eat". Starting with this old saying, the Pavilion of the Republic of Korea guides the visitor…

In Korcula, an island facing the southern part of the Dalmatian coast, we find Vela Luka that with its…

Using light to enhance a bottle of wine

A new concept in fine wine retailing, Hedonism Wines in Mayfair is a sophisticated wine boutique anticipated to become…