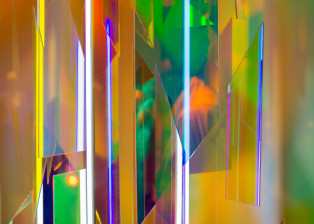 Efficiency of public lighting is more than a topic debated: spending reviews, downsizing consumption forced, austerity regime, decrease power on hours, technological upgrading through more efficient sources and monitoring systems are the major topics being debated today in the field of urban lighting. The general feeling, supported by the practice of urban lighting project, is that the situation is more complex and that there are different arguments than efficiency based on calculations and statistics and supported by technology. The theme of urban floodlighting implies aesthetic, psychological and social arguments, it contributes to develop of the image and the use the city itself: the issue is not only how much light pouring onto the streets and squares of our cities but when, where and what to illuminate. Quality lighting does not depend exclusively by light alone but also by urban materials, the surfaces of the city that is showing up in the night: the concrete and asphalt, low light diffusion and just kept cities certainly not contributing to make the space more inviting city night and better lit.

Focus on what the light illuminates is one way to think of new indirect lighting strategies that are environmentally responsible, because they involve more correct use of light in a creative, smart and efficient and economically viable way. All thanks to a careful project of the materials that comprises the city’s surfaces: surfaces such as sidewalks, roads, tunnels, underpasses, roads and paths and vertical surfaces such as walls and facades in order not to disperse the light or absorb it in black asphalt but to differentiate it, diffusing it, reflecting on it, increasing it. With the same outgoing light from lighting fixtures, it offers better illuminated space view, more visible, more interesting view that can orient but also make it more welcoming the urban night.

These are not extreme technological innovations, but just simple steps that recut techniques light amplification without the use of energy, through the materials. Three simple examples to improve the quality of urban lighting.

Using white on the roads

Thinking back to the old use of white to color stones, tree trunksand the limits of the roads, the lighting designer Linnaea Tillett has used the same technique of diffuse surfaces to make a bridge underpass in East New York brighter and safer for pedestrians. Inserting materials and clear surfaces, painting portions of the vertical facades and rhythmic vertical elements of light colours transforms the light diffusing in a sustainable energy at low cost and with obvious advantages for inhabitants themselves: a step visible and accessible at night without adding new lighting sources.

Another example of improvement of light (candles) through the materials was to coat the surfaces of furniture with gold leaf  through a process of gilding that allows the Dim light available to reflect the resulting amplified. The same effect moved into an urban scale could be applied in particular contexts, citizens corners where it is useful to highlight steps and where the reflected light can improve the visibility but also aesthetics. Reflection of light was one of the distinctive elements of a lighting design by Leni Schwendinger, a lighting urbanist in New York who used of reflecting surfaces in the lighting project of the Triple Bridge Gateway in Manhattan. These reflective panels emit a carpet of light on the road surface without disturbing the vision but by creating the feeling of a bright room because urban amplify light by extending the perceived size.

A sidewalk that lights up

Finally, inspired by photoluminescence, we could imagine urban places in which the surfaces are illuminated independently without the use of energy but only thanks to the presence of phosphorescent materials mixed both inside of the cement in the form of aggregates. These new photoluminescent materials would be able to emit light, for a limited time, independently, thus increasing the photo night light.

Figure A example of photoluminescent material for functional surfaces:Glowcrete of vergelabs.com

It is important to conclude that these three examples have a sense if applied intelligently designed in terms and situations that require it to increase urban quality, night strengthen the perception, the sense of orientation and to create a memorable and emotional image of the city without disproportionate expenditure of resources and energy. Despite the necessary maintenance that they need and its considerations in terms of economic impact and LCA, these three examples open the possibility for a more complete view of urban lightingin which not only the street pole contribute to quality but above all night the relationship between light and materials that make up the city itself.