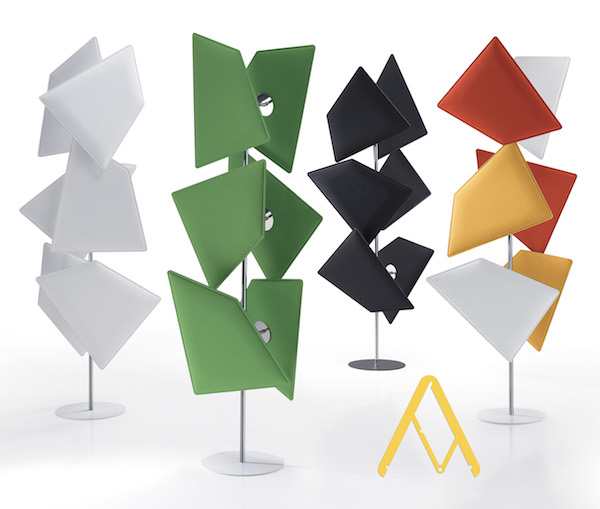 Flap, Design category for the job, designed by Alberto Meda and Francesco and produced by Caimi Brevetti.

Flap won a prize at the Golden Compass

Golden Compass award for design and innovation that always contemplates the beautiful, the useful and comfortable

The Snowsound technology uses variable density panels which allows a selective absorption than other frequencies, the panels are compliant with the UNI EN ISO 354 and sound absorption class A as classified in the UNI EN ISO 11654.

“The idea at the base of the flap is that of an acoustic panel that does not need to be hidden or masked. Exploiting panels to two faces and the SNOWSOUND® technology, the flap becomes variable, being composed of several modules. The panels can be located in space according to the needs of our contemporary lifestyles. Not so much a partition wall, but as a structure that can stand on the wall or ceiling, which provides the end user the creative and expressive freedom, maximum ”
The Flap System, much more than a sound-absorbing panel, won the judges who stressed the exceptional performance of “a versatile and free system that indicates a new solution to an invisible problem as the” sounds and noises.

Caimi Brevetti has made Triennale, with sound-absorbing panels FLAP, using innovative SNOWSOUND technology, the “Do Not Disturb room”, which was adopted to imagine a situation without disturbances, a necessary condition for searching, playing with the metaphor of noise.

Vivarium, from factory to restaurant

A restaurant became quickly one of the most renowned of the entire Bangkok, son of a project that could…

Cutting-edge projects: HI-MACS for the restoration of a library in London