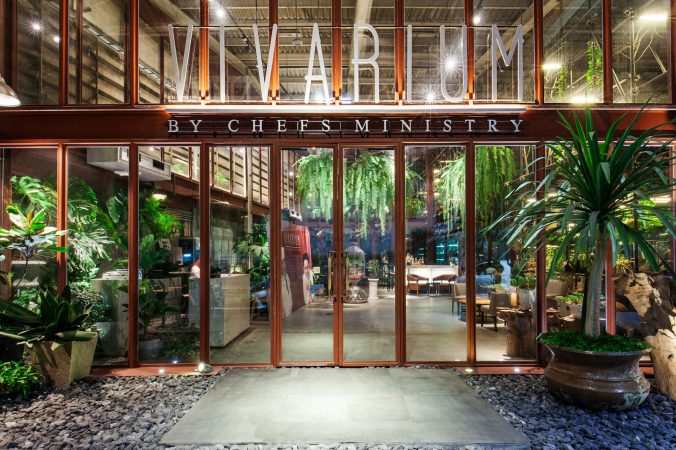 A restaurant became quickly one of the most renowned of the entire Bangkok, son of a project that could be called architecture of adaptive reuse. The study Hypothesis and Stu / D / O Architects architecture has brought new life to a now disused industrial complex, turning it into Vivarium, a culinary center where you can enjoy the best Japanese and Thai specialties. The starting point was an old industrial warehouse, remained virtually unchanged in the predominantly white structure.

A reuse project low cost but of great visual impact, made keeping in mind the validity of fundamental dictates increasingly also used in terms of interior design, especially creative: cost reduction, material recycling and re-use of existing pre. To that effect to strengthen even further the concept is the presence within the area of 600 square meters, of objects found on site and invested in the new identity of furnishings such as iron doors, steel pipes, tree roots.

Elements to which has been given new life by painting with red dell’antirust and making them the centerpiece of the interior design of the restaurant that looks like a terrarium, or “container for life.” L ‘interior is embellished with a thick vegetation that populates the top of the space also enriched by the ceramic creations Yarnnakarn Art and Craft Studio. In addition to the restructuring, the Hypothesis architects, already known for their approach to adaptive reuse, they are busy actually to build the brand and the concept, choosing the color red as a guideline to communicate the new energy that characterizes Vivarium.

The project is also the winner of the category Bars & Restaurants Inside, world festival of interiors 2015. A dreamlike, futuristic but that has its own identity in what was already there, not to forget the starting point. A must if you’re planning a trip to Bangkok and you love fusion cuisine and green interior design.

Golden Compass to Caimi for Flap, stop the noises!

Flap, Design category for the job, designed by Alberto Meda and Francesco and produced by Caimi Brevetti. Flap won…

Cutting-edge projects: HI-MACS for the restoration of a library in London