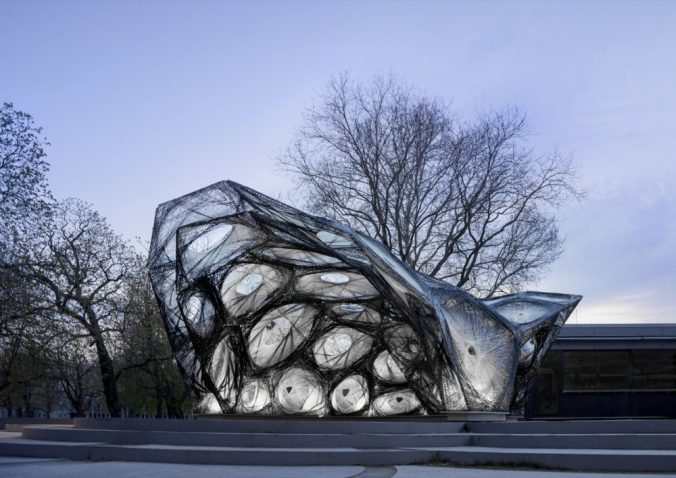 The Institute for Computing Design (ICD) and the Institute of Building Structures and Structural Design (ITKE) at the University of Stuttgart have designed a Pavilion visually and physically reminiscent of an insect, or rather a beetle. The working group is not new to these recent projects: in fact another hall has been recently designed, and it is based on the exoskeleton of a lobster; its structure is designed and built on the model of the skeleton of a sea urchin.

The project is based on robotic development of double modules structures composed of layers of carbon fiber: in this way the entire architecture remains minimal and lightweight, allowing a high degree of freedom. It covers an area of 50 square meters, but weighs only 593 kg.

The team of researchers and students have used high resolution 3D models of various beetle shells – known as elytra – to conduct an analysis of the complex internal structures, working closely with biologists and paleontologists of the University of Tuebingen.

These structures were converted then into a set of design principles, made with glass and carbon fiber reinforced polymer to give the hall an optimal strength-to-weight ratio.

“The project presents a new approach to composite fiber structures in architecture”, explained researcher and member of the ICD team Marshall Prado.