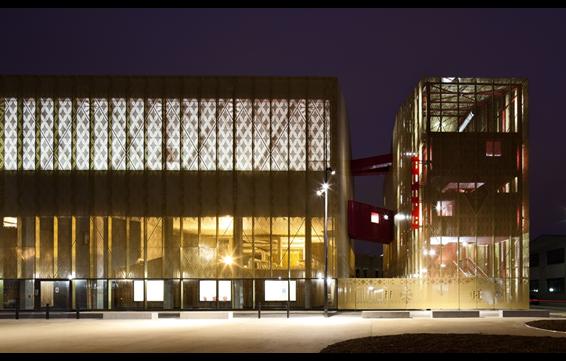 By the 20th century, Saint-Denis and its neighbouring communes, Aubervilliers and Saint-Ouen, had become one of the largest industrial sites in Europe. Today, the whole of the Plaine Saint-Denis is undergoing post-industrial redevelopment, its derelict factories making way for offices and its sub-standard housing being replaced by shiny new apartment blocks. It is in this context that the Casarès-Doisneau school complex was built, on a former industrial site at the border of the two communes, with financing from both

The programme called for classrooms and ancillary spaces for over 500 nursery- and primary-school pupils, as well as a sports hall for both the school and the local community. AAVP, headed by 42-year-old Vincent Parreira, was selected from 170 competition entrants.  The intention was to retain both in memory of the area’s working-class past, but while the chimney could be saved the hall proved too dilapidated for reuse. Nevertheless, it was decided that its volume should
be replicated in the new building as a complement to the chimney, and that the area in front of it, formerly occupied by industrial structures, should be left clear
in order to form a public space. The new hall building dazzles the eye: perforated, gold-tinted aluminium panels envelop it like an industrial-strength net curtain. Belying the simple geometry of the hall’s volume, the patterned perforations add a wealth of decorative detailing, and for many casual observers evoke the moucharabies of Arab and Moorish architecture. On its concrete-framed ground floor, the new hall building contains the school canteens, while rising above them is the wooden-framed sports hall. This dual system of concrete ground floors and wood-framed upper storeys was used almost throughout the school in a spirit of sustainable development, what the French call ‘construction douce’. Inside, the sports hall reproduces a Saulnier-type structure in glulam members, and is walled with high-performance polycarbonate sheets that keep heat in while allowing light through − but not too much, since it is filtered by the external perforated panels.

The panels in turn imprint their shadow on the polycarbonate, producing an effect of luminous wallpaper. Changing rooms and technical areas are housed in an adjacent metallic structure linked by flying ducts and a ‘factory’ footbridge. Although the sports hall’s perforated metal panels are continued all along the ground floor of the classroom buildings, their upper storeys have received a different treatment: their wooden structure is echoed externally by larch battens, cut in situ to evoke cross-shaped braces, and decorated with turned-wood lozenges and distinctively detailed window covers and surrounds.

The architects have chosen to leave the larch untreated, meaning that the most exposed parts will soon weather to a silvery grey. The courtyard-side classrooms give on to timber-slatted walkways that provide sun shading and rain protection, and are connected
to the playground by external wooden staircases. Unadorned larch slatting dominates the courtyard, and proves handy for fencing off a central green area (there’s another on the roof).

It continues on to the buildings’ undersides, where they are lifted up on pilotis to form préaux (covered outdoor play areas traditional in French schools).