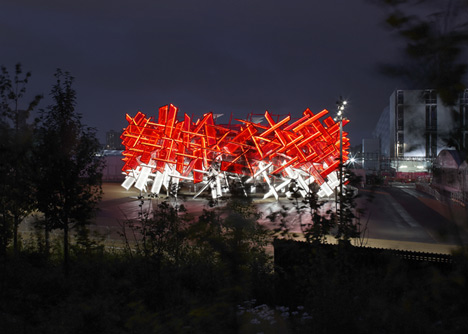 Coca-Cola has commissioned an Olympic Park Pavilion designed to celebrate the best of British youth. The designers of the Pavilion, Pernilla & Asif*, are critically acclaimed up-and-coming architects who were selected through a process designed to help discover the next big architectural talent in the UK and give them an opportunity to showcase their talents at the London 2012 Olympic and Paralympic Games.Olympic Torch Relay.

The innovative Coca-Cola Beat Box, which takes inspiration from our Move to the BeatTM campaign, will enable people to ‘play’ the Pavilion through interacting with sounds embedded within the architecture of the building. Its giant crystalline structure is made up of over 200 interlocked translucent air cushions, each the size of a billboard. Visitors will be able to ‘play’ designated cushions as they ascend the exterior of the pavilion, remixing ‘Anywhere in the World’, the uplifting track featuring sounds of five different Olympic sports created for Coca-Cola by GRAMMY award winning producer Mark Ronson and 2011 Mercury Music Prize nominee Katy B.

Maxine Chapman, Director of Showcasing with the London 2012 Olympic and Paralympic Project Team for The Coca-Cola Company, said: “With the eyes of over four billion people on London this year, we want to use our long-standing association with the Olympic Movement to shine a spotlight on Britain’s brightest stars and inspire young people to pursue their passions.

*Pernilla and Asif impressed us with their creativity, technical skills and vision. I’m delighted that we’re able to give them such a fantastic opportunity to showcase their talents and passions on the world’s stage. “I have no doubt that every visitor to the park will be inspired by their innovative and groundbreaking design, both during and beyond London 2012.