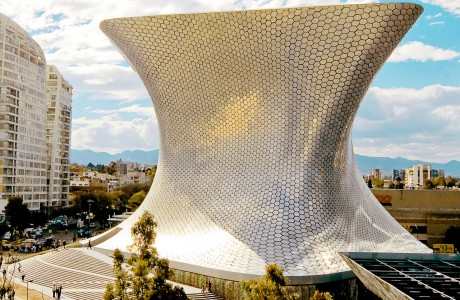 16,000 aluminium hexagonal modules characterize the Soumaya Museum in Mexico City, an impressive architecture created in six years by Fernando Romero architect. This building has more the characteristics of a sculpture, it was described as “dazzling“, “flamboyant” and it was also called “impossible to build“. But the South American architect (one of the youngest in the country) won the challenge.

The difficulty was the exterior: a reflective and glossy façade, on which aluminum hexagons seem to hang in balance. It was a large and very heavy structure, for which it was necessary to design a skeleton of 28 vertical columns made of curved steel and seven reinforced slabs surrounding architecture.

A lattice effect difficult to achieve and studied through a sophisticated technology software developed by an international Geometric network, that develops software and applications for the building.

This software allowed the team of architects and engineers to display the project in a 3D model and to make all the necessary calculations to make the structure (apparently poised) be firmly and in balance. All the hexagons were positioned in digital, in order to study the orientation and the degree of curvature of the surface to fit the shape to the reticular pattern of base, also considering possible changes in natural steel and concrete structure. The result is surprising because the external pattern becomes fascinating setting that hides the support columns and almost 100,000 tubular elements of the structure.

A curiosity: this architecture also wants to be a treasure trove. Wanted by Carlos Slim Helu, the wealthiest man in the world, the Soumaya Museum – named Slim’s wife died in 1999 – retains a prestigious international art collection: it is the largest Latin America one, with 66 thousand artworks. Access to the collection is free. Since many Mexicans can’t afford to travel abroad to see art collections, Carlos Slim Helu wanted to host a prestigious international collection in Mexico.

The building includes a 20,000 square metres exhibition space divided among five floors, as well as an auditorium, bars, offices, a gift shop and a multi-purpose hall. The upper floor is the largest space of the Museum, with the suspended roof overlooking the city.