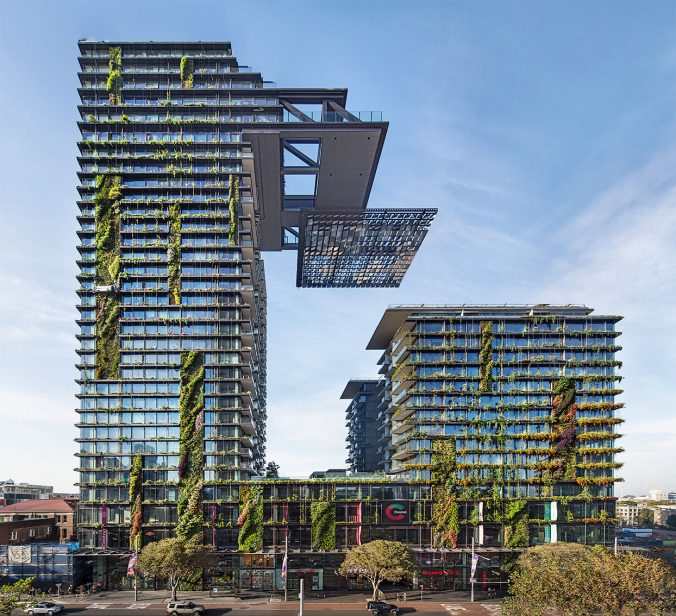 “Landscape is architecture. So at One Central Park, we have created a kind of continuity between the park and the buildings, so the facades literally extend the park into the sky”. Jean Nouvel

In Sydney there is the highest vertical garden in the world: One Central Park (OCP). Designed for Frasers Estate by French Pritzker Prize winner Jean Nouvel, with botanist Marc Blanc, the building consists of two blocks, one of 34 floors and one of 12 follrs, which form a kind of continuum with the adjacent park. One Central Park is the reference point of the redevelopment project of Carlton & United Brewery area in Sydney.

Designers, both already known for green facades, achieved a 130 meters high building in a recently built area, to accommodate citizens in new luxury homes in a peaceful setting, whose facades are for 50% covered with vegetation. 250 species of flowers and Australian climbing plants were placed in horizontal shelves almost invisible among and for the structures that make the walls suitable for hydroponic cultivation.

As Nouvel said, the vertical development of OCP has allowed to bring the park into the sky along the facades and made it visible from a distance. On the South side, the park develops into a sequence of seemingly random placed slabs planted that form a veritable urban green sculpture and parade through the pages, so that each apartment is equipped with not only a balcony, but also of their own piece of the park. On the remaining sides, the green runs continuously the walls thanks to the vegetation and to a system of planters, 5 km long, which functions as a set of shelves that project shadow.

The plant walls constitute a solar shading system that reduces power consumption for cooling up to 30%, providing the necessary shadow to apartments in warmer months, when plants are more lush, and letting sunlight in colder ones, when part of the foliage is lost.

Although of very different height, the two blocs interact with each other not only through the common language of vertical green spaces but also with a continuous play of reflection of sunlight and artificial light that you create by using the 42 heliostats, motorized mirrors following solar light, which redirect sunlight into 320 spotlights placed on a ledge protruding from the higher volume , which lead into the beam down, illuminating areas that would otherwise be perpetually in shadow due to the presence of the buildings themselves.

In the tallest building, designed for the houses, there is in fact a power that acts as a communal terrace. The terraces also have beautiful panoramic views for residents.

After sunset, the structure becomes a canvas for the art installation by the French artist Yann Kersalé, which uses LED light to sculpt in the sky a play of sparkling Fireworks.

A series of terraces also connects the building to the Park, complementing the landscape with more modern architecture. One year after the completion of construction, One Central Park thanks to the enormous variety of climbing plants changed greatly the Sydney skyline, giving the Australian city increasingly green connotations.