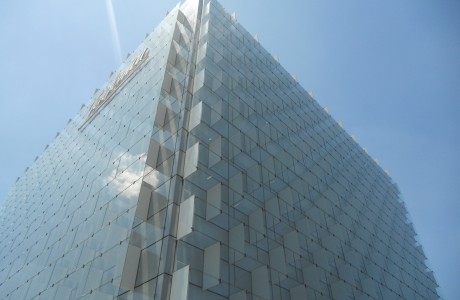 Located in the north of the Spanish capital, with a strong architectonic identity, the project, which follows an architectonic philosophy of sustainable development, is a gigantic business campus enclosed within a glass wall, crowned by the greatest solar paneled roof in Europe.

The 26,000 m2 of solar panels that cover the canopy-roof transform solar energy into electricity, 4,389,000 kw/h/year, which in turn reduce atmospheric emissions of CO2 by 2000 Tn. The new headquarters of Telefónica, Distrito C, which is, due to its dimensions, the largest corporate project in Europe, and one of the largest in the world, houses its twelve thousand employees in one sole headquarters located in the north of Madrid, in Las Tablas. A total of 16 buildings, 400,000 square meters, and 6,000 parking spots are some of the figures that shape Distrito C, located in Las Tablas.

Characterized by the homogeneity of the buildings, joined by an immense roof canopy, the new business campus is spread over a 200,000 square meter rectangle of surface area and extends below ground. The district is divided into four phases, in each of which are two four-story buildings and one ten-floor tower. In addition to these twelve buildings, there is another singular building –the Central Building- where the company management is located, another housing all of the catering services (open to the public) and a third holding a daycare center, a fitness center and a health center for company employees.

The project uses one sole coating material on the façade: glass. It utilizes the entire range, from total transparency as an intrinsic quality of the glass, to the artificial and absolute opaqueness of color silk-screened glass. For the former, extra-clear glass in large dimensions 4x2m is used. For total opaqueness, a new type of glass that was developed specifically for the project was used, making the interior vision compatible with the exterior opaqueness thanks to an advanced technology.

Technically the façade was constructed through a modular system of double curtain walls. The combination of filtering qualities and distances between layers reduces the resulting solar factor –relationship between visible light transmitted and rejected heat- to 19%. This favorable relationship is absolutely necessary for the installation of the cold beam air-conditioning system with its reduced maintenance costs. Except for the four towers, all of the buildings are crowned by an impressive canopy, a rooftop that covers the entire construction, unifying the complex. Additionally, the canopy, which serves the purpose of refreshing and shading the common areas and corridors that internally connect the four phases, supports the largest surface area of photovoltaic solar panels (16,000) in all of Europe. An impeccable landscaping project incorporating the architecture and organized around a large pond was developed in Distrito C.