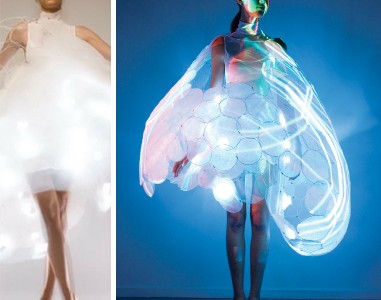 The research aims to deepen the phenomenology linked to the world of electroluminescence (EL) and its many applications.

To better understand the electroluminescence (physical phenomenon characterized by the emission of electromagnetic radiation – light-originated from the recombination of electrons and holes, issued following the application of an electric field) study the atom in its structure as well as in its composition was necessary.

The prevalence of LEDs is due, first, to ever greater need of society, using energy sources that maximize their energy efficiency to limit the massive use of fossil fuels; furthermore, both the LEDs and OLEDs, commercially little known, are perceived by users and used by designers as innovative and high emotional impact components; that’s why they are more and more attractive to the international scene.

The areas in which light-emitting diodes have been and are still used are varied, from more traditional lighting field (with applications in design and architecture), technology (in continuous development and for this they are becoming a new source of innovation), then moving to aesthetic medicine, the automotive industry, using the EL for the measurement of the quality of electronic devices until coming to the most spectacular applications of light art and fashion.

1.1 the phenomenon of electroluminescence

The luminescence is a physical phenomenon which consists in the emission of electromagnetic radiation (light) by a material, due to stresses of various kinds. In particular the electroluminescence (EL) is the emission of light by the material, following the application of an external electric field; the energy supplied to the system is converted to light energy.

The first report on EL dates back to the mid-twenties and is the work of Russian physicist O.V. Lossew, engineer of a laboratory of radiotelegraphy of Novgorod, who got light emission applying an electric field to a sample of SiC (silicon carbide).

Despite the observation of this phenomenon dates back to over seventy years ago, its importance was recognized only when developments can optimize Electroluminescent devices so that the light radiation emitted in the visible spectrum, came to be used to meet the lighting needs.

The discovery of the phenomenon of electroluminescence in organic semiconductors (OLED) dates back to the early 1950s and is due to Bernanose and co-workers. The same phenomenon was studied in 1963 by Pope on Anthracene crystals.

The prototype built by Pope required but too high voltage (200-1,000 V) to be used commercially. In 1987 two researchers from Kodak, C.V. Tang and S.A., obtained an efficient VanSlyke’s photo electroluminescence in low voltage (10 V <) thanks to new technologies that enabled him to prepare uniform layers of organic compounds with a thickness of a few tens of nanometers. This was possible thanks to modern techniques of thin film deposition and uniforms and the introduction of molecules with a best of issue.

1.3 the dissemination of LED and OLED Electroluminescent devices

In the early years of the third millennium, LED and OLED technology is easily produced on a large scale with leading manufacturers of semiconductors and optoelectronic components involved in the development and expansion of industry.

Electroluminescent lamps were used for the first time in the military due to their quality, flexibility, strength, light uniformity, low thermal dissipation, minimum thickness and possibility to be realized in any form.

As proof of the huge interest in this field of research is the nobel prize in chemistry awarded to H. Shirakawa, Alan J. Heeger and Alan G. MacDiarmid in 2000 for research in this area.