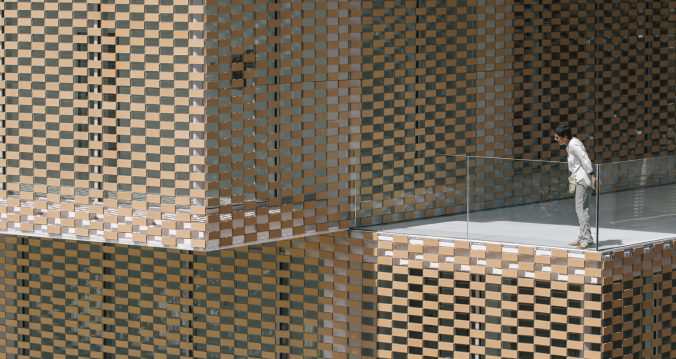 The Cultural Center ‘La Gota’ is the new multifunctional exhibition building dedicated to cultural events with temporary spaces, to become a new urban center pole.
The origin of its name comes from an old building, located on the same ground in the ’30s, built to cope with the problems of child malnutrition, it called the “Gota de Leche” The Drop of Milk.

The center has a room for temporary exhibitions, a room for the permanent exhibition of the painter Feliu Sofía and the Tobacco Museum.

The geometry of the building goes back to the structure of the tobacco plant with the principle of equality and diversity of this plant whose leaves are similar, but different at the same time. The plans are five and rank among staggered blocks and put one over the other. The facade consists of a double skin, the glass wall and the ceramic fabric called FLEXBRICK, a second skin, an industrialized system of flexible ceramic foils, covering the entire building creating a light-dark game useful to disperse light internally and to make “immaterial” the presence of the building on the street.

The building contains a vertical stem and a structure from which to branch plants of equal size and morphology, but with a height and different characters and slightly staggered.

Sunlight penetrates the space through the front holes it looks like almost dematerialized.
Materialization of an idea of ​​Vicente Sarrablo, Flexbrick is a technology made possible thanks to research projects lasted more than five years: through them it was possible to give shape to an industrialized and flexible system of ceramic plates for the composition of coatings and laminated structures .

This website uses cookies to improve your experience while you navigate through the website. Out of these, the cookies that are categorized as necessary are stored on your browser as they are essential for the working of basic functionalities of the website. We also use third-party cookies that help us analyze and understand how you use this website. These cookies will be stored in your browser only with your consent. You also have the option to opt-out of these cookies. But opting out of some of these cookies may affect your browsing experience.
Necessary Sempre abilitato
Necessary cookies are absolutely essential for the website to function properly. This category only includes cookies that ensures basic functionalities and security features of the website. These cookies do not store any personal information.
Non-necessary
Any cookies that may not be particularly necessary for the website to function and is used specifically to collect user personal data via analytics, ads, other embedded contents are termed as non-necessary cookies. It is mandatory to procure user consent prior to running these cookies on your website.
ACCETTA E SALVA