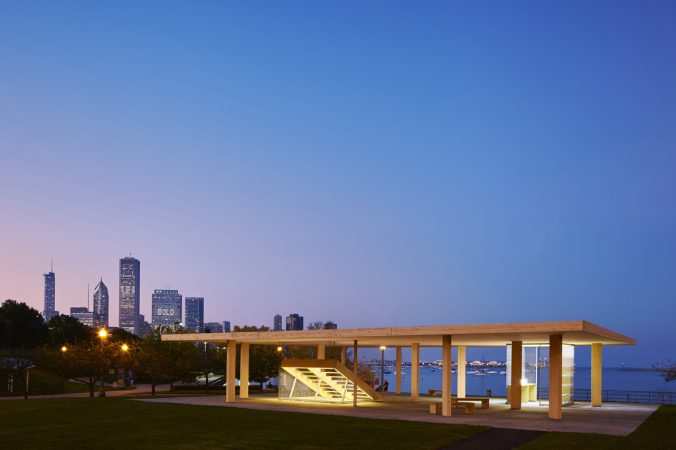 The “Chicago Architecture Biennial” (from 1st October to 3rd January) gave much attention to the theme of landscape and nature. In partnership with the Chicago Park District, it called the contest “Lakefront Competition“: commissioned by the Mayor to promote architecture, it aims to create new cultural experiences in neighborhoods and parks.

“Our parks as public spaces in Chicago are a vital part of our city’s heritage and this contest is an opportunity to bring the design even in these environments”. Open to international designers, the competition invited participants to create a kiosk, a job on a small scale, that in next spring will be installed along the shoreline of Lake Michigan, one of the liveliest areas of the city.

At the opening of the Biennale, the winner was announced: the Ultramoderne team. The architects made Chicago Horizon, a kiosk designed with cross-laminated timber; the layers overlap so that each object is rotated 90 degrees relative to the previous one, creating a very impressive result. The project will occupy a space along 17 meters, and will house a library and a cover, with a large shaded canopy, will provide shelter from the wind and rain.

The use of wood and light-coloured express lightness; the project in the lines and volumes is basic and clean. They thus formed an urban space that is usable and that also lends itself to hosting public events.

Opened on the landscape, you can enjoy the beauty of the Lake on all sides. The coverage is suspended by 2.5 metres, while the structure is held together only by a metal mesh.