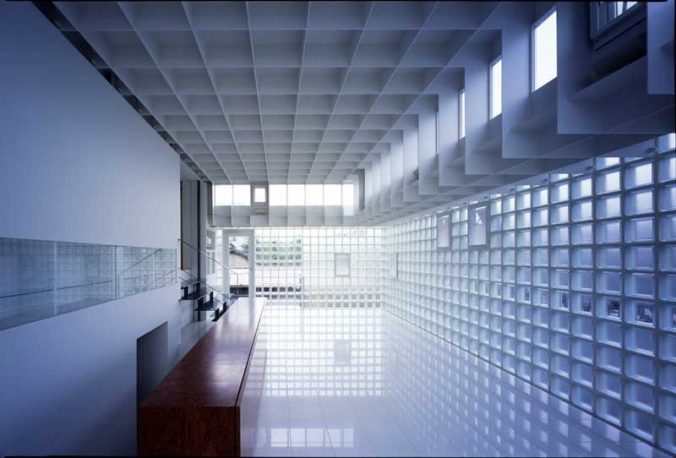 Built in a residential neighborhood in Bunkyo, Tokyo, Crystal Brick house, the glass house of Japanese architect Yasuhiro Yamashita, founder of Atelier Tekuto, is a project as ambitious as bold.

A House, whose glass block walls that resemble a Lego structure, create a bright space to respond to a specific request of the owner of a brilliant as Crystal who collects. The architect Yasuhiro Yamashita admits he was strongly influenced by the owner’s hobby, a collector of crystals. “That’s where my inspiration came to this building,” he says.

This House is influenced by the architectural concept of “masonry” that uses identical items placed on top of each other to make the whole of the building. “Making the entire structure with individual elements, means distribute the weight of the structure,” says the designer.

Steel framed house on three floors, is therefore the result of a single purpose: take a single glass block, multiply it many times and produce an entire glass house.

The firm’s philosophy of Yasuhiro Yamashita, known in Japan as the architect green because of the conception of creative houses are characterised more by a touch of green, is simple: working with people, materials and environments related to projects that can be placed within architecture.

Twenty years of work by Yasuhiro Yamashita is an architecture capable of challenging the clichés. The architect and his team have made a reputation as revolutionary unique homes builders. Exploiting natural resources such as wood, soil, bricks and recycled metal are transforming the future of designing of houses in Japan. Appearance, environment and touch, here’s the secret of a house designed by Yasuhiro Yamashita.

This type of experimentation allows Yamashita to go beyond the common logic and bring together professionals and artisans in order to seek unconventional materials for his buildings. Yamashita believes that in the materials themselves is already in action.

The House has been redesigned by Yamashita in 2004. As it stands today, it is an exceptional work of art in which light creates suggestive chromatic effects in all the interior spaces. The transparent brick part was originally an extension of the old House which had damaged over time. Yamashita has built the brick house transparent to remedy the problem. To build the structure were assembled of steel bars as in a bird cage in which they were placed into different types of glass blocks to form transparent walls and earthquake-resistant.

The main feature of the House? Absolutely no pillar of support in any of the open spaces of the various plans. “I had to create the walls of glass blocks – says Yamashita – and build a new structure because I had to make room in what used to be a property that is extremely limited. And to do that I made a very thin outer wall “. “The homeowner liked the light and was a collector of crystals. Also at the back there was some old buildings that were shadow and made it dark. For this he asked me to give plenty of light, “he adds.

In practice, Yamashita decided to design the House with glass block walls. In this way he got that “sunlight penetrated the House.” The use of glass blocks for the construction of the walls was an inspiring idea that required collaboration with structural engineers, manufacturers, builders and university laboratories to study the behavior of the glass block.

When it comes to designing buildings and homes, Japan has stricter standards in the world. This is because must face more natural disasters than any other nation. Adding the limited availability of land, architects and builders say that designing and building buildings is more difficult in Japan than in other countries. And since it is a country prone to earthquakes, the Government is very rigid when it comes to applying these standards.

For Japanese architectural standards the wall created by Yamashita was decidedly thin. While the normal walls in Japan are thick about 25 cm, the glass blocks that make up the exterior walls of this House are thick just 9.5 cm: another demonstration of the tremendous skill of Yamashita in do magic with the building materials.

Once solved the problems of construction of this House from 112 square meters on three levels, to respond to the request of the owners who was full of light, Yamashita transparent glass blocks placed on a base of translucent blocks, allowing people to see inside and out and filling at the same time the light House. Strategically placed opaque blocks were also used where needed privacy.

Unsettling, artist of space and always ahead of its time, Yasuhiro Yamashita is definitely has a talent for innovation and imagination of the future.