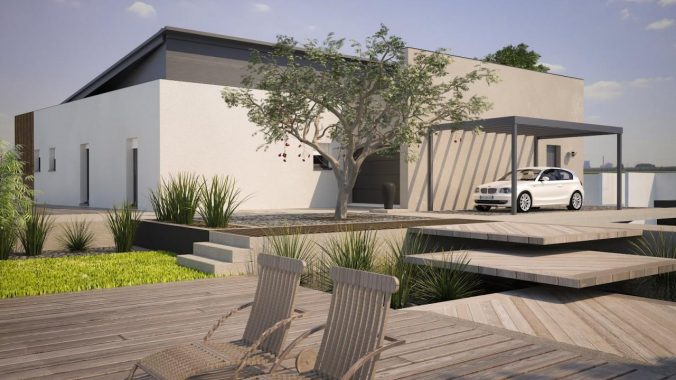 Concept MFC 2020:behind this title referring to concept cars, stands a marvel of technologies for future individual low-energy housing solutions.

Here, we are far higher from passive houses, that have “only” very low energy consumption. The Concept MFC 2020 goes one step further: the energy produced by this house not only covers all the needs for the house itself and its inhabitants, but it also feeds an electrical car. Focus on this innovation allowed by our know-how and products.

Through Construction, Distribution Solutions has been a long term partner to Maisons France Confort (MFC), leader on the French market for individual, low energy houses. The commercial range “Maisons Performances” (efficient houses) uses STYLTECH™, our steel structure system made out of galvanized thin profiles. In general, this market means around 400 houses built by our customers each year, mainly in France, but not only. This system with strong and durable steel structure, enables faster and cheaper building, from walls to roofs. STYLTECH™ allows a thermal insulation in line with the future French RT2012 regulation thanks to a insulated outside envelop using AMC sandwich panels without reducing the habitable inside surface. This solution offers also an exceptional seismic resistance, an important asset with anti-seismic requirements getting stronger and stronger, at least in France.

So, it was naturally that ArcelorMittal has been associated from the beginning to the MFC project to design the ultra-performing house for the 2020 decade and over. What would be indeed more natural to elaborate tomorrow’s best house than to make converge in one common project the most acute pieces of innovation by renowned specialists? So started the “concept house”, now being built near Lyon in France. Velux, Saint-Gobain, BMW, EDF, Schneider… are some of the players in this ambitious project. Distribution Solutions provides the Styltech structure but also the super-insulated panels for the roof and the walls (produced in Onnaing) as well as the car port structure (made by ArcelorMittal Distribution Solutions France in Yutz).