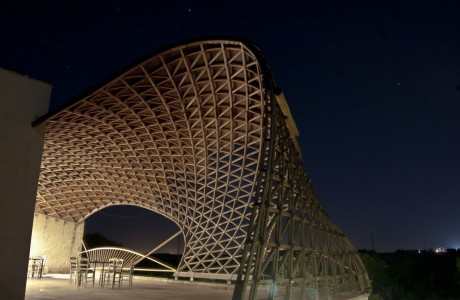 There were once the skyscrapers, steel giants toward the sky, result of visionary winning bet by Willian Le Baron Jenney, father of the Home insurance building in Chicago, built in 1885. Now it’s time to update our vocabulary by placing the voice “plyscraper“: that means wooden skyscrapers ready to invade the city. This is a necessary and sustainable architectural evolution, that Michael Green (nomen omen), Canadian architect, founder of MGA and author of “The case of tall wood buildings“, declined in the project of a 30-story tower in downtown Vancouver that, if created, would become the tallest wooden building in the world. “In reality – MGA architects explain – we don’t care it will be the highest one, but it will give a different view of the architecture of the city of the future».

ENVIRONMENTAL SUSTAINABILITY – the data are clear: in Great Britain 47% of greenhouse gas emissions are caused by buildings and 10% of CO2 in the air comes from construction materials. The use of wood as a construction material would lead to the capture of CO2 from buildings and the reduction of air pollution. For example, Guardian cited the comparison of a twenty-storey traditional building whose emissions total about 4,300 tons/mc against 3,100 tons/mc “captured” by a wooden construction.

IN THE WORLD – the most important new wooden building is the Skating Oval in Richmond, published on the occasion of the 2010 Vancouver Winter Olympics. Then there is the Merritt Building of Christchurch, in New Zealand, the Mall reopened last March, entirely rebuilt in wood after the earthquake of 2011 designed by Andy Buchanan, Stefano Pampanin and Alessandro Palermo from the University of Canterbury.

IN ITALY – there is great attention to wooden buildings at Politecnico di Torino, where there is a woodlab. In Milan, on the other hand, there is “Signs of change”: it is a social housing complex consisting of 4 nine-storey towers with 123 class A accommodations designed by the Florentine architect Fabrizio Rossi Prodi. And the movement grows more and more though the wooden design in Italy is still focused on small buildings.