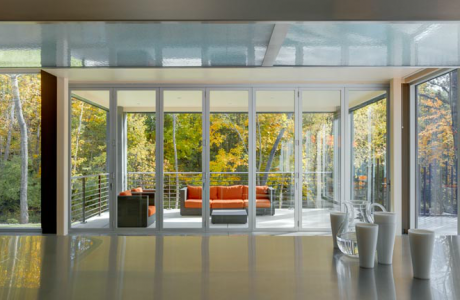 A Zinc House is a house made of zinc, which sits on a rally in Ohio. It is a private house that bears the signature of Jose Garcia, designer who studied architecture in Argentina but opened his own studio in America.

Garcia has coated two volumes of structure with only one material that reveals large openings. He chose the zinc, which enhances the project giving great effects. The designer chose Quartz-Zinc and Anthra-Zinc finishes from VMZINC.

Zinc has a reasonable cost, it requires no maintenance, but it creates a protective layer that blocks moisture and chemicals, especially around the house.

The house volume, linear and simple in appearance, hides careful architectural choices, aimed at achieving a project that was in complete harmony with the environment.

Garcia has opted for a parallelepiped-shaped structure, then cashed in a timely manner to manage a sheltered terrace. At the entrance, a large shed greets visitors. Both vertical and horizontal planes are clad in zinc.

Designed this way, the house seems to cancel the difference between outside and inside. The stark contrast between the environment and building almost fails and the house fits into the context and it seems almost in symbiosis with nature.

Vivarium, from factory to restaurant

A restaurant became quickly one of the most renowned of the entire Bangkok, son of a project that could…

Golden Compass to Caimi for Flap, stop the noises!

Flap, Design category for the job, designed by Alberto Meda and Francesco and produced by Caimi Brevetti. Flap won…