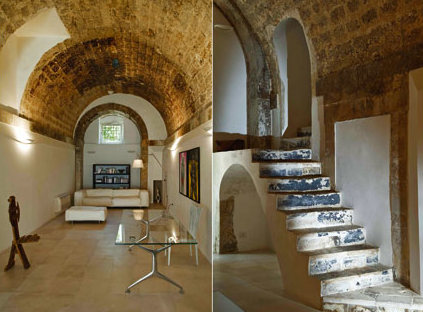 A precious, light second home, inside a strong, heavy work of architecture, an ancient place of bright tuba and Modica stone. A tunnel, almost a cave, dug into an 18th-century palazzo that was originally made as a courthouse for Noto.

Carlo Ferine is a Florentine wine expert of great fame and success. After studying agriculture, he rapidly achieved great international renown, including an award from the American magazine “Wine Enthusiast” in 2007. In an interview conducted some time ago, Riccardo Falchion, editor of the food and wine periodical L’AcquaBuona, asked: “If you had to leave Tuscany, what region would you choose?” and Ferine, clairvoyantly perhaps, responded: “Sicily. What a land, what potential… still waiting to be exploited”. Evidently he was already on his way south, at least in mental exploration.

Today we can see the results, in the completed restoration of an 18th-century complex in the historical center of Noto. A comfortable pied-à-terre for his wine-related activities on the island and for moments of relaxation, in a city with many extraordinary characteristics. Entirely reconstructed after an earthquake in 1693, Noto is a true treatise on Baroque architecture, and since 2002 it has been inserted in the world heritage listings of Unesco, along with Caltagirone, Militello Val di Catania, Catania, Modica, Palazzolo, Ragusa and Scicli. The architect Corrado Papa, who has a studio in Noto, approached a typical theme for this city, that of the recovery of structures and spaces that date back to the first phases of the reconstruction, most of which have remained pretty much intact.
The 300 years that have elapsed have simply added an irregular patina to the stone, making these places even more precious. In this antique place, as monumental as an exterior, Papa has operated with great care, capturing and enhancing all the elements of historical value, and adding new features with caution and balance. One wise decision, for example, was that of limiting the treatment of the antique parts to a minimum, exploiting the emotional and historical depth of the signs of life and experience, like the blackened tuba stones near the hearth. On the ground floor, a single room extending from the street to the internal garden, the fields of white stucco are like neutral inserts in restored paintings, underlining the materic and figurative energy of the powerful barrel vault.
The floor, in Modica stone, is cut by a glass opening that offers a view of the water cistern. The old staircase leads to the upper level, where the antique stone floor has been maintained and restored, along with the almost black ceiling in reeds and plaster. Integral parts of the project include the sculpture by Giovanni Fronted, four paintings by Michele Ciacciofera, and the furnishings, supplied by Habitat, that introduce, in a delicate but authoritative way, the gentle modernity of contemporary design.