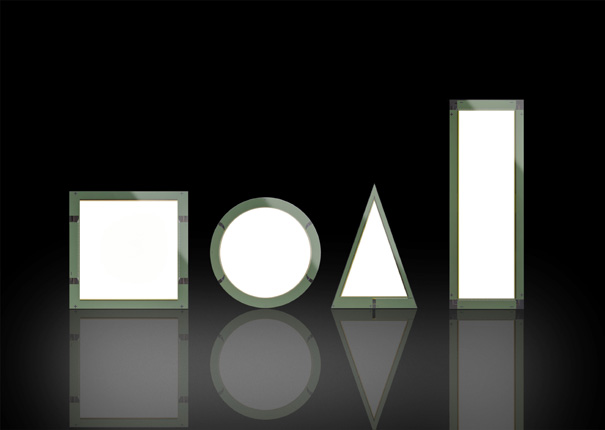 Many things have changed in only a few years and many more things will change in the near future starting from LEDs. Greater efficiently, better colour quality, increased luminous flux and lower costs are factors that will finally determine the success of this new artificial light source.

Though, from the technological point of view, the transformation towards solid state light seems to be entering its most active stage, from the luminaire design point of view, an essentially traditional approach prevails in which the dominant trend is to adjust the new technology to the typical forms of the fixtures designed for traditional sources. This approach is motivated partly by the need to offer, in the shortest time possible, the LED products that the market is asking for so urgently, and above all, by the lack of a clear indication of the “formal” nature of the new LED source. A traditional fixture takes shape starting from a well-known object, such as the light bulb, while in the case of LEDs, designers are faced with a source that is not bound to any constraints, and that does not give them a precise starting point; a greater freedom that paradoxically may limit experimentation in favour of a more conservative approach.

This is proven by the creation of the so-called COB or LED arrays: many LED sources are assembled on a unique square base in aluminium or ceramic only a couple of centimetres big and with a luminous flux that can be compared to traditional metal halide sources; it is a sort of LED lamp with a well-defined shape on which it is possible to build a lighting fixture similar to the ones created with traditional sources. Apart from the“conservative” approach there is a more experimental and innovative one, in which professionals try to fully exploit the dot-like nature of LEDs. Having the possibility to distribute single linear light sources could enable designers to create luminous lines or even luminous surfaces passing from a one- or two-dimensional approach to a three-dimensional one.

The designer will no longer be tied down by a single source but will have the possibility to create luminous forms, mould the matter and create truly innovative lighting fixtures. The greatest resistance to this approach is of technological nature; if, on the one hand, this possibility is fascinating, on the other it clashes with technical issues which are difficult to solve. LED manufacturers are careful to these needs; an example is a product that has recently won the Design Excellence Award at the Lightfair 2013: a sort of flexible surface made with low power LEDs.