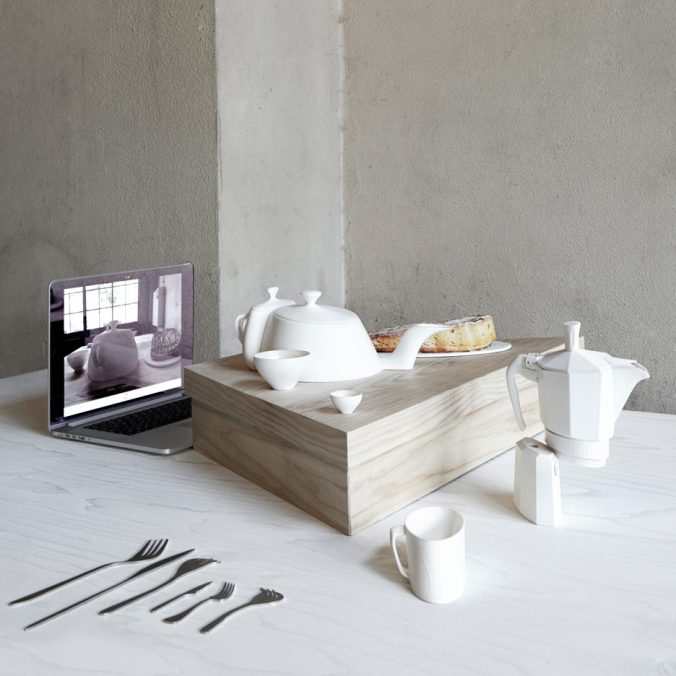 Imagine enjoying breakfast with your parents or your girlfriend via skype: from this idea the work of Louisa Zahareas, graduated at the Design Academy in Eindoven, was born.

Louisa drew a set of white porcelain that apparently seems to have the wrong size and prospects.

A coffee maker that appears hovering over herself, forks and spoons that look too flat to be used, two teapots that merge into one: these designer items seem so strange and unreal but, if they are seen through a computer screen, they acquire their natural shape.

A fun, perhaps not very functional, project but able to tell a lifestyle, modern and technological.

Louisa worked designing 3D prototypes and watching them through the camera of her phone and her pc. This is a design work and also a work of calculations and numbers: in fact these complex and irregular shapes were studied mathematically. The designer has collaborated with Dianne Hansford, expert in computational geometry and 3D designs.

“I was inspired by the painting and the use of 2D. This approach is not new, it was already used in the past for ‘Ambassadors’ of Hans Holbein. However, it was necessary to adapt this approach to 3D “.

“I was inspired by my personal story… I increasingly met my family in virtual spaces!”.

“I see these objects as props. I imagine the space in front of our computers or our smartphone as a theatrical stage where we spend some time and, therefore, we carry out different activities. This study wants to tell new forms of interactions “.

Homi Milan, a creative HUB, traditions and communication: the style is renewed

Pre-register now click here!     From digital challenges to the rediscovery of the Italian artistic heritage, passing…

SPACE&INTERIORS: A SUCCESSFUL DEBUT The only event in town is directly connected to Salone del Mobile space & interiors…

Once upon a time. The design was inspired by fairy tales

Green light to imagination and creativity! The design is inspired by the world of Fables and starts making fun…