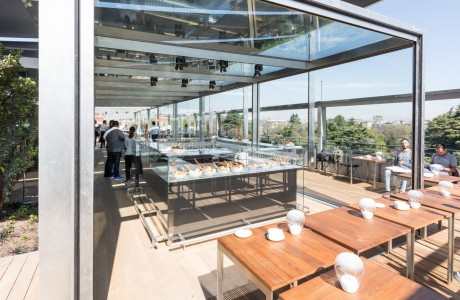 Designed by architects Paolo Brescia and Tommaso Principi from OBR, the new restaurant on the terrace of the Palace of Art, with the “Arts & Foods” Hall curated by Germano Celant, is one of the most important initiatives of the Triennale di Milano for Expo 2015. After restoring the roof terrace over the main hall according to the original plans by Giovanni Muzio, Triennale of Milan shows a new dimension of quality catering, prepared by Michelin-starred chef Stefano Cerveni.

All of the Milan Triennale exhibition have defined a synthesis between design and architectural experimentation. At such times the Park was transformed into a theatrical platform of new myths for urban living and Muzio’s building became an admirable cultural promotion device.

The OBR project, winner of the competition organized by Triennale of Milan in January 2014, interprets the tradition with a lightweight, rigorous and dynamic solution. The restaurant is designed as a transparent greenhouse surrounded by greenery and suspended on the Sempione Park, with a spectacular view of the Castello Sforzesco and the entire skyline of Milan. Going up on the terrace of the Palazzo dell’Arte, you are greeted by an aromatic garden designed by landscape architect Antonio Perazzi, behind which the restaurant Glass Pavilion (33 x 5 metres), set back from the façade portals.

“Triennale has always been a reference of social and cultural life of Milan. The restaurant like greenhouse suspended between the Park and the city was born from the idea of enhancing the terrace of Palazzo dell’Arte as a place strong urban sociability, evolving sensitive space that works under dynamic exchanges between inside and outside “-Paolo Brescia and Tommaso Principi explain.

The Hall, which is completely open on the perimeter, is characterized by a light stainless steel modular structure which allows easy and fast mounting and dismounting directly in situ, combining industrial technology with craftsmanship. The structure design, engineered by Buro Happold and Milan Engineering and built by Capoferri firm, resumes the geometries of historic spans of Muzio.

A large 400 square meter mobile tent floats suspended above the Glass Pavilion. Completely open on one side, it runs the Hall like a greenhouse, thermoregulating with different mode day/night and summer/winter bioclimatic use, and allowing guests to dine repaired by the sun or dining under the stars. As a video installation, the curtain suspended on greenhouse comes alive with images and lights designed by Guido Bianchi, referring to events sponsored by Triennale for Expo and providing guests with a unique experience between haute cuisine and design, suspended between the park and the city.

The architectural design was developed by Paolo Brescia, Tommaso Principi and Andrea Casetto from OBR, with Maddalena D’alfonso, and it involves the construction of a glass Pavilion above the terrace of the Palazzo dell’Arte of Triennale di Milano, recently restored by the architect Alessandro Pedron.