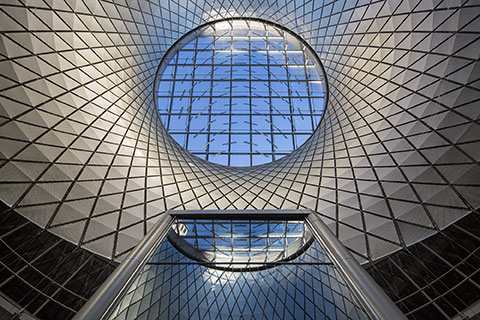 Designed by Grimshaw and Arup and opened in New York, in the heart of Lower Manhattan, after thirteen years since the September 11, the “Fulton Center” is a large metropolitan station with an average of 300,000 daily passengers linking nine of the busiest metro lines in the city (A, C, J, Z, R, 2, 3, 4, 5) between Fulton Street and Broadway.

The station, which is located in the same neighborhood of the World Trade Center, was closed following the attacks on 11 September 2001 due to some damage caused to the structure. A massive restructuring plan has transformed the old train station in a completely new building, a center with shops and offices which covers a total area of ​​about 6130 square meters.

The need to enlarge the old Fulton Street subway stations, no longer capable of supporting efficiently the movement of travelers between galleries and links of nine underground railway lines has prompted the authority of metropolitan transportation (MTA Metropolitan Transportation Authority) to entrust development schemes of the new transit hub at Arup and Grimshaw who have redesigned the exchange platform and passenger access to the subway.

New York subway system, the largest in the world, is historically born from competition among private companies. Grimshaw and Arup had to resolve century-old rivalries among the nine subway lines around Fulton Street. Their stations originally belonged to three competing subway companies. The architects had the task of integrating the links between underground lines, to make it a viable station.

Grimshaw and Arup have solved the problem of crowding and facilitation of the paths by installing a large number of stairs, elevators and access points equipped with escalators in the subway underground sidewalks. The most important link is the one that allows travelers of the lines 4 and 5 (which are the US’s busiest underground lines) to reach the sidewalks of the lines A, C, J and M.

The construction has led to the rehabilitation of the station, to the creation of new underground passages and in general with the redevelopment of the spaces with the aim of creating a structure capable of rivaling in beauty with the famous Grand Station in New York.

However, the project has undergone over the years a series of delays due to the work and cost more than expected: from the $ 750 million to the 1.4 billion dollars, about twice.

The Fulton Building, the main station building which serves as the entrance and exit to the street, is located one block from the new buildings of the World Trade Center and was thought of in terms to attract in that area workers and residents after the 2001 attacks.

On the road the Fulton Building, a major glass and steel cube from which you access to 5 subway stations, has a glass facade which extends on the sides.

The entrance on the road enables travelers to gain access to the underground system from one of the four stairs and escalators, to get to the circular underground mezzanine which makes it possible sorting like the spokes of a wheel.

Heart of the project is the large central atrium surrounded by a transparent envelope that reaches a total height of 36 meters, where a huge tilted glass oculus, facing south, cutting the top of the dome structure.

This space does more than just transmit natural light through an opening; it collects a larger view of the sky’s changing conditions. This is thanks to Sky Reflector-Net, a 79-foot-tall tensile structure suspended inside the conical atrium. The combination sculpture–daylighting device was conceived by artist James Carpenter, who then collaborated with Grimshaw and Arup to fine-tune it and integrate it with the architecture and engineering. Composed of a steel cable net and 952 perforated, folded aluminum panels, it drives light deep into the cavernous space.

The potential of Building Information Modeling together with those of a robust parametric design helped to define each component in its geometry, creating a flexible model of the real-time structure.

This ingenious structure allowed the Fulton Center to obtain LEED certification for energy efficiency and to have airy and not claustrophobic underground rooms, thus guaranteeing maximum comfort to the more than 300,000 travelers each day. The main objective of the interiors of the concept is to suggest, through the materials, the shapes and the light, a feeling of dynamism and movement.

Design Team: Primary headhouse building at the corner of Broadway and Fulton