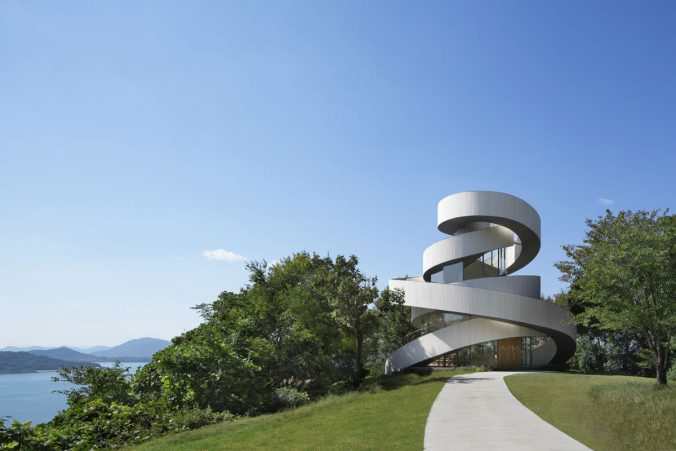 You must arrive in Japan, at a luxury resort in Onomichi, near Hiroshima, to admire this beautiful wedding chapel. The work of studio NAPS Architects, located in the middle of a hill with a panoramic view of the inland sea of Japan, the chapel was born from the fashionable intersection of two merging spirals, becoming one.

The embrace between the two spiral stairs allows creating a freestanding structure, composition and which architecturally symbolically embodies the Act of marriage in a pure form. “A single spiral – tells the architect Hiroshi Nakamura-would have been unstable in the horizontal direction and subject to vibration in the vertical direction. Combining the two scales, so that each support the other, we have built an independent and stable structure “. The two spirals come together and connect perfectly on the top, to 15.4 meters in height, forming a single tape.

The philosophy of the project: two spirals that become a
By the movement of two spiral staircases comes the Chapel, completely surrounded by glass Windows. About 80 seats and a 160 m central aisle leading to the altar, geared towards a symbolic tree, behind which you can admire the spectacular view of the ocean.

Unlike normal buildings where elements are distinct and identifiable, in this chapel there are no boundaries between structures, in fact the spiral staircases combine to form the roof and define the space, serving as a decorative element and symbolic. And just in the ideal embrace between the two scales meet the Union symbol of marriage where two people, each with their own path in life, become one. The bride and groom walk separately the two scales, to rejoin at the highest point and ask the sky permission to marry. The couple, who hitherto lived separate lives, go back down the stairs together, finally color: this evocative idea which underlies the design of the chapel.

The exterior of the building is covered by vertical panels of wood, painted white, and finished off with a titanium-zinc alloy, a material resistant to corrosion damage caused by sea breeze and flexible enough to be bent easily. Using the zinc alloy on crowning, walls, ceiling and window frames, the simplicity of the design is also achieved through the use of a single material.

coupling elements in four different directions, the four points at which the two stairs closest, has produced a kind of hoops to constrain the deformation to the outside and created a three-dimensional support to withstand the horizontal forces – making the two spirals are self-supporting each other. Intermediate steel pillars filled with 100 mm diameter, subject to only vertical load, support internal spiral. The outer spiral is coupled to internal spiral like a rush. In order to reduce the volume of the steel structure in the upper portion, you used a pendulum base isolation device for light construction. At three points of the spiral staircase outside, mainly stimulated by vibrations caused by trampling, provision is made for three dampers (TMD).

It is also envisaged that, once removed the scaffolding, the building suffered at most 30 mm for sedimentation under its own weight, which could have caused the inclination intermediate pillars. It was then developed a structural model that applied the same amount of reverse torque to counter rotational force predetermined caused by natural sedimentation. As a result, the uprights, deliberately slanted in construction, have become construction vertical after completion with a margin of error of 2/1,000 between floors. This sophisticated and daring structural design was conceived by Ikuhide Shibata of Arup.

All Windows differ in height, thickness and shape. To allow the glass panels to move freely when subjected to torsion of the building during an earthquake or high winds, each Panel has been fitted with braces (DPG) placed on the inside at the base of the zinc-titanium housing.