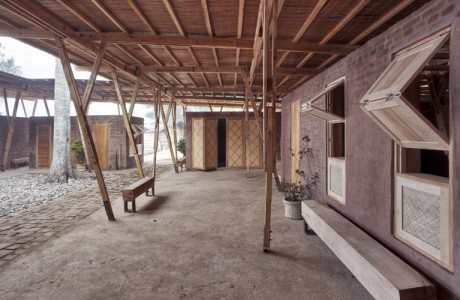 Andreas G. Gjertsen and Yashar Hanstad are two Scandinavian architects. They grew up professionally in the heart of design and innovation. Next 25 September they will be guests of the international exhibition of ceramic, telling their project for cinnamon growers of Indonesia.

It is a job with a budget of 30 million euros, and it involved both students and young architects. It starts with a story: a french businessman, after having crossed the Sumatra (the third largest island in the Indonesian archipelago) arrived in Norway, in Trondheim, at the studio of designers. He told them the producers of cinnamon life, explaining that the 85% of whole cinnamon consumed in the world is produced in that land, Sumatra. A story that is not taking any chances even sad details, including the human, and also economic, condition, to which all workers were subdued.

Impressed, Andreas and Yashar decided to invest on this land, and to design a school for cinnamon growers. Cassia Coop Training Centre was born this way: an institution that also aims to establish new principles, for example workers receiving a pay, a healthcare plan and access to schools and education.

The school is a building designed with lightweight materials. It was made of cinnamon wood, it rests on a brick base (local production) and cement. Wood was chosen to recall the nature and the woods around which it was built. It was very important to be able to create a breezy climate, reducing the impact of the Sun’s rays. For this, and for the need for earthquake-proof requirements, a central block was created, around which the various lock functions (workshops, kitchen, etc.) are designed and organized. Union element is a continuous coverage covered with sheet metal and bamboo mats. In the project 70 local workers were involved: a choice dictated by the need to reduce costs and also by the desire to raise awareness.