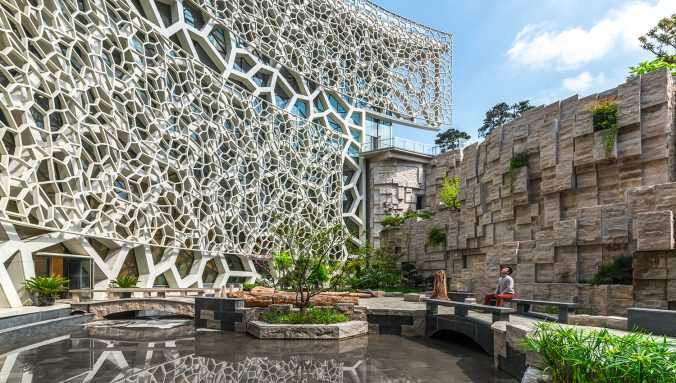 Bioclimatic, geothermal energy, water recycling and green coatings for the new Shanghai Natural History Museum which is destined to become one of the icons of sustainable architecture

It was opened in 2015 in Shanghai, the long-awaited Museum of Natural History, designed by the architectural Perkins + Will. A spiral-shaped shell building that covers a total area of 44,500 square meters and consists of 6 floors of exhibition space, offices, a hall of 30 meters height permeated with natural light filtering through a glass wall inspired by the cellular structure of plants and animals, a garden for outdoor exhibits and a 4D theater.

The museum, one of the largest in all of China, is located in Jing’an District, the center of Shanghai, within the Jing’an Sculpture Park, an exhibition space the public outdoor sculpture.

It has a collection of over 240,000 objects, from dinosaurs to mummies of the Ming Dynasty. The new building replaces the original Museum of Natural History improving display capacity of the collection of artifacts from around the world by arranging an exhibition space 20 times larger.

“For people who grew up in Shanghai, the old nature museum has a special place in their memories,” noted Managing Director for Perkins+Will’s Shanghai office James Lu. “Likewise, there is much excitement surrounding the opening of the new museum, which will have a similar place in the hearts of both residents and tourists alike. The museum will bring a renewed experience of natural history to this city for generations to come. We are honored to have served as the architect.”

The general organization of forms and interior was inspired by the nautilus shell, one of the most beautiful and complex geometric shapes found in nature. Externally the “spiral” has a sloping grass cover floor, a furnished outdoor roof garden to make the building accessible from different perspectives. The spiral curve on itself and at the same time closing slopes around the central lake, visual reference of the structure, surrounded by a series of rock terraces in the traditional Chinese gardens style. The landscape and outdoor spaces have been treated by the landscape architects of Hoerr Schaudt.

“The use of cultural references found in traditional Chinese gardens was key to the design,” said Johnson. “Through its integration with the site, the building represents the harmony of human and nature and is an abstraction of the basic elements of Chinese art and design.”

The constant reference to the nature is also represented by the facades of the building symbolizing as many elements of the natural world: the glass facade represents the power of the sun while the reticular white coating, made of multi-layered glass, concrete and steel, represents the cellular structure of plants and animals, the living wall to the east is the earth’s vegetation and the north stone wall suggests the shifting of tectonic plates and reminds the walls of the canyon eroded by rivers.

The Perkins+Will project takes advantage of bioclimatic, green roof and geothermal and stands as an example of sustainable architecture.

It is a bioclimatic building in that it responds to the sun by using an intelligent building skin that maximizes daylight and minimizes solar gain. The oval courtyard pond provides evaporative cooling, while the temperature of the building is regulated with a geothermal system that uses energy from the earth for heating and cooling. Rain water is collected from the vegetated roof and stored in the pond along with recycled grey water. All of the energy features of the museum are part of exhibits which explain the story of the museum.

The Shanghai Natural History Museum was one of the finalists in the competition at Word Architecture Festival 2015 in the category “Culture – Completed buildings“.