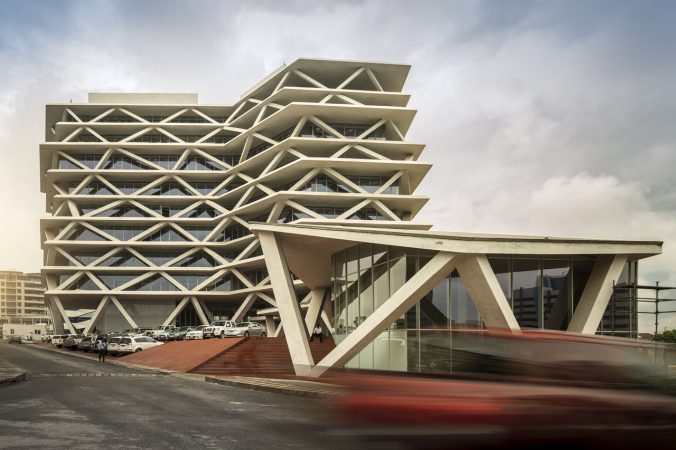 The building envelope is the essential element for thermal performance optimization in the project of Mario Cucinella Architects for a multifunctional building in Accra, Ghana.

One Airport Square is the first shopping complex to be awarded in Ghana the allocation of 4-Stars (Design Stage) by the Green Building Council of South Africa. The intervention, designed by Mario Cucinella Architects, is the result of a design process efficient, able to integrate technological innovation and culture, architecture and engineering, to achieve maximum efficiency in the design to reduce the building’s energy consumption and optimize the use of natural light.

The multifunctional building of approximately 17000 sqm located in the growing commercial area in Airport City, within the development area of the international airport in Accra, Kotoka, includes a nine-story tower for offices and a ground floor, for listings that embraces and protects a space of encounter between people is configured as a public square, open on the northeast side of the settlement. Is the building envelope the key element that demonstrates the integration between form, structure and environmental strategies.

The theme fits into the problems triggered by the latest developments of the conception of the building envelope. The wrapper as microclimatic filter between the outside and the inside, has a major role to play in this regard.

Through technological solutions based on bioclimatic approach, the “skin” of the building becomes the element that sets the climatic and environmental conditions between indoors and outdoors and allows you to create buildings with thermal qualities and Visual adaptable, in which the skin is not only housing, but buy a casting vote for the entire building system. However the correct design of a building cannot be separated from the knowledge of the local climate and the resulting climate data. One of the starting points for the optimization of the thermal performance of the building envelope is the knowledge of factors and climate conditions that affect the geographical and environmental context in which the building will be placed.

The project of One Airport Square, was designed starting from a careful analysis of the climatic characteristics of the place, the site of the topography and the optimal orientation in order to identify the best passive and active strategies to be applied to the scale of the building. Being close to the equator, the Eastern and Western fronts, are the most problematic in terms of control of solar radiation, making them particularly exposed to solar radiation than the northern and southern fronts, to whom were then directed the main facades. This, coupled with medium-high temperatures present throughout the year, has made it necessary to adopt strategies aimed at reducing the need for cooling the building.

Predominant feature of the building is the movement created in the housing by a system of projecting cantilevered floor slabs, which protect the building from sunlight, glass façade undeveloped and protected from the Sun and from a sloping reinforced concrete pillars structure inspired by the Palm bark and become not only a decorative element on the façade but also help to give greater rigidity to the structure. The main local building material, concrete plays a key role in a structurally complex project where the pillars, being inclined at 60°, mingle with the beams and the floors act as braces for the remarkable boost V-beams-pillar forming the grid visible from the outside.

Composed of a fixed and a movable bottom, the glass façade behind the supporting structure allows natural light to radiate in indoor environments and helps dissipate internal heat to the rooms at night and to promote the contribution of natural light during the day. The mobile elements promote the natural ventilation in indoor environments especially in the period from December to March, characterized by low humidity and cool breezes.

The building is characterized by a compact design, with offices on all floors that overlook a courtyard open at the top to encourage natural ventilation that occurs between the external façade, thanks to the opening of the moving parts, and Foyer which then performs a function “camino” by invoking the air by natural convection which crosses and refreshes the offices. It is expected that the spaces of circulation, the central atrium, the exhibition spaces and possibly even air-conditioned reception area will not only benefit natural ventilation. However the high levels of humidity that characterize the rainy season, make it necessary to use a mixed cooling system, combining a mechanized to natural ventilation.

Fresh air distribution systems are considered expected conveyed in floating floor and the recovery of exhaust air in the ceiling of the halls. Nocturnal mechanical ventilation will also cool the thermal mass of the building by reducing cooling peak loads during the day.

Green shading systems formed by green areas on the terraces allow you to incrementally the shadow effect and allow you to mitigate the microclimate.

Is planned in the future evaluation of the inclusion of additional shielding systems integrated to the facades and the use of glasses with low solar factor, allowing adequate penetration of natural light in environments, crucial to the reduction of energy consumption.

To curb consumption of drinking water and the resulting economic impact, you are using technologies that limit the amount of flow, duration and time of delivery; greywater and rainwater entering the water system for using the toilets flushing toilets and for irrigation of the outdoor areas further reduces the overall impact of the building. The entire structure promotes an energy savings of around 30-40% compared to buildings of the same type.