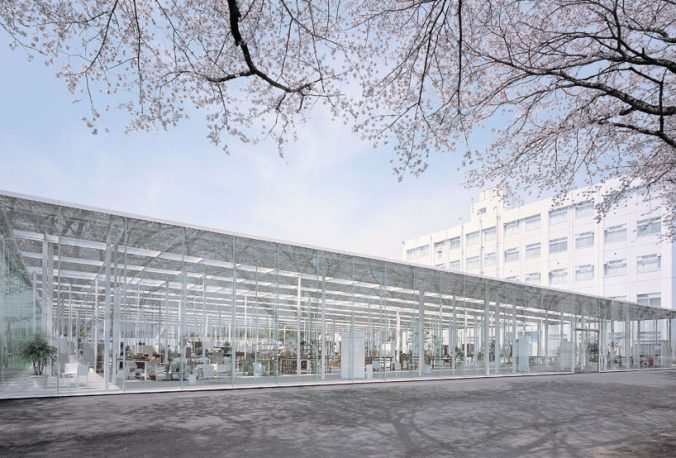 Kanagawa Institute of Technology Workshop (KAIT). One room of 2000 square meters, a forest of slender steel columns white 305, a curtain of glass continues without opaque elements of support … How can we forget in this multifunctional space for students of Kanagawa University technology such a unique place for lightness and elegance?

Designed by the young architect Japanese Junya Ishigami, with the contribution of the study of structural engineering and Mechanical Engineering Office Konishi Structural Engineers Environmental Engineering, the Pavilion is the result of a design and construction process lasted three years. “Nature and architecture overlap-so tells KAIT Pavilion-like columns with Ishigami trees. The columns have the texture of raindrops that fall and the reinforcement grid must be thick as water vapor in the clouds “.

It is possible to reach a compromise between the dreamlike vision of the architect of a support structure so thin as to look like falling rain with a roof that looks like a veil of clouds and the laws governing the building science, in an area with a high seismic zone like the one on which the Pavilion?

Watching the Hall apparently yes because the opera is as wide as slender and ethereal, which has no weight. A floor flush with the outer surface of the walls made of glass plates high 5 m without any system of stiffening, a condition often referred to as inevitable in order to absorb horizontal forces of an earthquake, subtle interior columns to the perimeter arranged so seemingly random, much to seem unable to withstand a flat surface made of glass and steel by 44 m total light. The roof, which is also white, consists of a steel plate of just 16 cm thick surrounds and encloses the inner space.

The House is about as close to the feeling of working in outer space while being inside. To contribute to the idea of a walk in the Woods doesn’t cooperate only the random arrangement of the columns, but above all their fine form and nearly two-dimensional reminiscent of the falling water droplets. The particular climatic conditions in the region of Kanagawa, with heavy rainfall and high temperatures, allows creating a volume completely transparent and permeable to light much to merge chromatically with the surrounding landscape which is reflected in it in a game of mirrors, without fear of overheating of the indoor space. The use of glass and steel blades extra-clear thin emphasizes and creates an atmosphere of haze generated by heavy rain that Ishigami has researched since the early design sketches.

The “trees” of steel that make up this sort of artificial forest and support a large multifunctional space create hundreds of small to medium-sized spaces individually exploitable by students. The designer’s idea is that every student can, thanks to the thinness of the columns and their disposition, modular space individually according to your needs.

The carriage of the Pavilion is “active form structure”, i.e. something working together with the stresses of external loads applied to it: wind, snow or earthquake. Each of the 305 columns that make up the vertical support system is different in shape, distance and orientation. The intent is to create an artificial forest that evoke in anyone who walks into this space the idea of being in a forest in which everyone is free to manage the space as you wish, where sunlight filters through the trees by a series of transparent holes positioned on the cover made of steel sheet white.

The ingenious structural system consists of a grid of steel girders IPE 200 at the base of the cover under which engage the tops of the columns. Those subject to compression and buckling, a 40 in all, are made with slender box section profiles placed in the plane always with different orientations. They are related to special beams IPE, slightly thicker than that make up the coverage. These columns are housed at the base plinths made of reinforced concrete. The remaining columns are made up of thin box-hanging elements through grilled cover bolted joint. These columns have no plinth at the base but are fixed with a system to yet that blocks only when you have reached the optimum level of tension as a function of applied loads.

The process of fitting the saw staying columns subjected to compression in the floor plate, on top of this come concocted the grid and be hung columns subject to tension. Then on the cover were distributed a series of temporary loads per running meter so that the plate will Flex between a pier subjected to compression and the other outstretched columns and subside with the plate. Under the influence of this temporary load these anchors were set. Once the load is removed the plate is returned to its original position so that the columns were pulled toward each other in Summit reaching the status of ideal tension to ensure that they cooperate with the system whenever they are subject to an additional load and ensure the safety of the structure.

This website uses cookies to improve your experience while you navigate through the website. Out of these, the cookies that are categorized as necessary are stored on your browser as they are essential for the working of basic functionalities of the website. We also use third-party cookies that help us analyze and understand how you use this website. These cookies will be stored in your browser only with your consent. You also have the option to opt-out of these cookies. But opting out of some of these cookies may affect your browsing experience.
Necessary Always Enabled
Necessary cookies are absolutely essential for the website to function properly. This category only includes cookies that ensures basic functionalities and security features of the website. These cookies do not store any personal information.
Non-necessary
Any cookies that may not be particularly necessary for the website to function and is used specifically to collect user personal data via analytics, ads, other embedded contents are termed as non-necessary cookies. It is mandatory to procure user consent prior to running these cookies on your website.
SAVE & ACCEPT
Secured By miniOrange