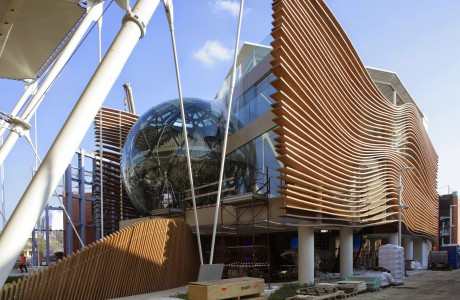 The Azerbaijan Pavilion for Expo 2015 has three big spheres guarded by wavy wooden walls: they are metaphors of biospheres and wind. The three large balls are environmentally sustainable and they represent the union between architecture, interactivity, art and technology signed by Simmetrico Italian team.

The Pavilion, named “Azerbaijan, treasure of biodiversity”, was presented in Milan by Anar Alakbarov, leader of Azerbaijan delegation to Expo and director of Heydar Aliyev Center, Stefano Acbano, manager of Europa, Americhe, Relazioni Bie, and Relations of the Division participating in World Expo 2015, and Daniel Zambelli, leader of the network of designers and creatives.

The structure was designed to give special attention to the environment and the natural heritage of Azerbaijan, which is considered one of the 25 major biodiversity hub in the world.

The building was built according to the criteria of optimization of bio-architectural quality, using technologies and energy-efficient and 100% recyclable materials. For example the louver – the “skin” of the wavy wooden slats of the pavilion – protects the microclimate of the structure, by lowering energy consumption. All materials and spaces are designed to make it functional and adaptable over time. At the end of the Expo, the Pavilion will be dismantled and moved to Baku, where it will become the centre dedicated to biodiversity of Azerbaijan.

While making the tour in Azerbaijan Pavilion, visitors will be accompanied from interactive multimedia installations and from videos designed to discover the identity and spirit of the country.

The Azerbaijan Pavilion consists of three glass biospheres with double curve which represent the protection given to life, development and protection of diversity. The wooden skin, on the longer sides of the Pavilion, represents the wind which wraps around the country and cultural streams that cross it.

In the first biosphere the visitor can discover Azerbaijan, its history and traditions, and he can see the most significant historical and natural views of the country, thanks to a video installation.

The second biosphere is dedicated to biodiversity. Here the visitor can find an installation reproducing a huge pomegranate fruit tree, symbol of the nation and its richness in terms of natural and anthropological variety.

In the third the biosphere the visitor can see an inverted tree, whose function is to translate the metaphor of the relationship between innovation and tradition in Azerbaijan, a summary of the roots which feed the future and move from the treasures to the works of craft and culture. The lower part of the tree encloses the visitor in foliage and in the spirit of renewal that is shown by three big screens through which you can “explore” Baku, capital of Azerbaijan and symbol of new emerging countries.

Anar Alakbarov said that the privilege of Azerbaijan is to be, for centuries, a geographical and symbolic meeting point between East and West. The country is also a marvelous biodiversity “hotspots” and it offers an unexpected wealth of landscapes, flora and fauna. The country is also a historical and cultural crossroads where peoples and religions have left a deep and living testimony of their presence. Awareness of Azerbaijan came from here and raised, and now it is able to consolidate one of the most rapid economic developments in the world: large investments in innovation and infrastructure and an attention to international relations, as the strategic, commercial and cultural partnership with Italy evidence. Azerbaijan participates in the protection of works of the Italian cultural heritage.

Azerbaijan is taking part in Expo for the first time with a Self-Built Pavilion: it will be one of the most interesting attractions, thanks to its technical and architectural complexity. The project is focused on biodiversity, respect of the environment and intelligent use of resources. These are the topics that will be covered for Expo 2015 during the six months of exposure and that will let Azerbaijan offer a valid contribution to the global debate on the future of food.