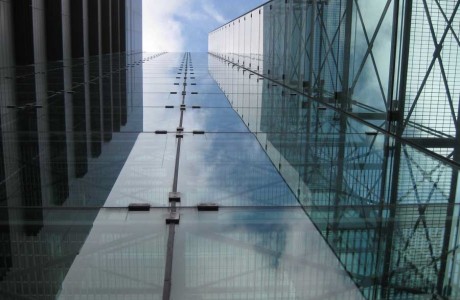 In 2002, Her Majesty’s Courts Service held an international competition to select an architect to design a new purpose built premises for the Department of Justice in the North West, the biggest court complex to be built in the UK since the Royal Courts of Justice. The building was procured through the UK’s Public Private Partnership model. However, in a first for this type of procurement, the Lord Chancellor’s Department chose the designer independently of site and developer.

Allied London Properties was subsequently selected as developer and the site chosen was located in the Spinningfields area of Manchester, just outside the city centre. The building occupies a tight inner-city site, bordered by Hardman Boulevard, Gartside and Bridge Streets.

The 34,000sq m Manchester Civil Justice Centre houses 47 courtrooms, 75 consultation rooms, in addition to office and support space over 15 levels. Sustainability has been a major consideration from initial concept with natural ventilation to all areas contributing to its BREEAM rating of ‘Excellent’. The working courts and offices are expressed as long rectilinear forms, articulated at each floor level, and projecting at each end of the building as a varied composition of solid and void. In side elevation, these elements collectively establish a dynamic and distinctive building profile; in end elevation, they form a powerful sculptural interplay of light and shade, depth and complexity. The architectural implication is that the courts are not forbidding or concealed, but open and accessible. This is a building formed of layers of transparency.

Each layer explains the building: the public domain, the working courts and offices and the judicial interface. The public domain is a glazed multi-level atrium with concourses serving all court levels and publicly accessed office areas. It is punctuated by meeting rooms and waiting areas, forming a complex of spaces within the void. Within this space the public are not only able to clearly comprehend the arrangement of the building, but also to relate outwards to the life of Manchester itself: a sense of expansiveness and connection, rather than enclosure and containment. The working courts and offices establish the substantive form of the building. They are held between the solid plate of the structure and services spine, and the perforated plane of the judicial layer. These elements allow a reading or sense of individual courts, without specifically defining them. They are doubled skinned. The outer layer of clear planar glass defines a singular, simple volume. The inner layer defines the interior volume, softened by the overlay of glass, but allowing a more complex and detailed reading of material, colour, pattern, glazing and surface, while retaining an overall sense of clarity of form.

The judicial interface is seen as the principal city scale signal of the Civil Justice Centre. The eastern façade will become the memorable ‘sign’ that clearly establishes this as the courts building and unlike any other building in the city. A filtering screen partially overlays the long rectangular forms of the courts. The screen is a veil, revealing and concealing the functions behind it. It provides degrees of visual privacy, security, solar screening, contained views, ventilation and daylight penetration into the building. From a distance, it reads simultaneously as a single planar, unifying element, and a complex and varied composition of pattern, colour, texture and light and shade which will constantly vary depending on sun angle and weather conditions. This filtering veil presents a legible image that symbolises the complexity and intricacy of the law, yet reinforces completeness and consistency.

Manchester Civil Justice Centre is testament to what can be achieved, despite site constraints, in court buildings. There is a strong sense of openness and transparency, indicative of the processes that are being undertaken within, as natural daylight and city views provide a backdrop to its functions. Externally, its distinctive form of cantilevered fingers and environmental veil, has not only created a unique building for its users, but also a new urban marker for the city in which it resides. It has made a significant contribution to the regeneration of the Spinningfields area of Manchester.