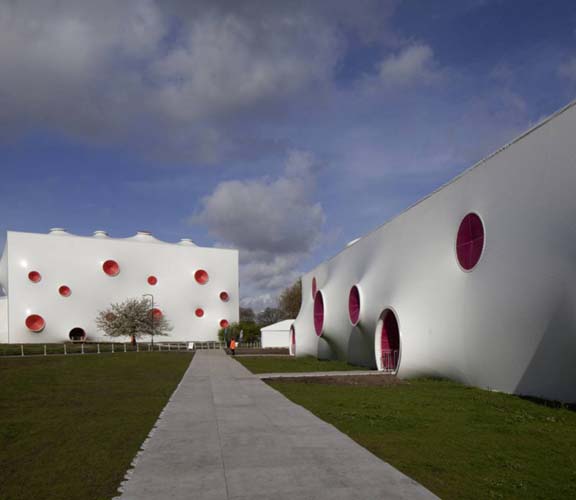 The temporary pavilions for the shooting competitions have been built at the background of a 1716 barrack: three venues with a plastic and polished envelop, whose uniformity is broken by coloured openings, the entrances as well as light and air, and three outdoor areas dedicated to shooting. The shooting ranges are located in Woolwich, borough in south east London, and in particular they have been installed, not without some controversy, in the area of the famous Royal Artilleries.

The spectators who will enter this Olympic venue will enjoy the background of the 1716 military base which is famous for being the building with the longest continuous Georgian façade in the United Kingdom. The installation, amongst the last to be completed and the fast the be built, is composed of three temporary buildings which are provided with indoor areas where the shooting competition with guns and bayonets will be hosted. One building, the one with the largest capacity, is dedicated to the fi nals while the others are for the qualifying 25 m games and the combined 10/50 m. Adjacent to these there are also three outdoor areas for shooting – skeet, track and double track – in addition to the Paralympics archery competitions.

The designers, Magma Architecture from Berlin, have created a fresh and light venue which enhanced the festive and celebratory character of the Olympic games. They have, infact, designed three buildings which create a small campus, which generates in the visitor the idea of an open fi eld where the competitions take place. The image of the buildings, is characterised by a plastic and polished envelop whose uniformity is broken by coloured openings, which have been compared to the suckers of an octopus tentacles, which are both entrance and passage for light and air. Because the buildings will be dismantled after the games the place has been designed in order to be a legacy for the visitors and the local community, leaving a mental memory of the Olympic shooting range in Woolwich.