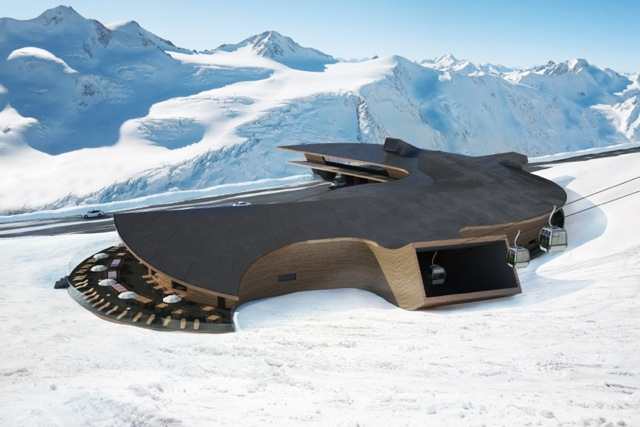 We are over 2.0 m high, at the southern end of Ötztal Valley. Here, in Hochgurgl, Tyrol Austria the young architect Michael Brötz designed the Top Mountain Crosspoint: is a multipurpose building which houses the Museum of Europe, in addition to the new cable car, an elegant rooftop restaurant and the road toll station.

The pride of this particular architecture is the Top Mountain Motorcycle Museum: this is a project of great symbolic value, occupies an area of 2600 m2, and is the result of an investment of more than 23 million. Liked by twin brothers Alban and Attila Scheiber (hoteliers in Obergurgl, also owners of a ski school as well as the scenic High Alpine road Timmelsjoch)-large motorcycle enthusiasts and collectors, the Museum is home to over 170 the historical pieces, jewels that tell more than 100-year history of the motorcycle.

The Museum, which will open the April 8, 2016, brings with it another value: is designed on one of the most famous mountain roads precisely among motorcyclists to the breathtaking views of the highest cross-border road in Austria. The Top Mountain Crosspoint is situated right on the Summit of this border crossing between North Tyrol and South Tyrol Italian.

Here are exhibited vehicles from all eras, for example the Harley Davidson of 1914, 1926, 1938, the years ‘ 40 and ‘ 50. Among the special exhibits there is a Brough Superior of 1939, built by legendary driver George Brough, or a two-cylinder motorcycle Indian of 1912. The oldest piece on display dates from the Imperial period: is a fabulous Laurin & Klement of 1905. In addition to two wheels, the Museum presents some cars are deeply rooted in racing history: a Ferrari California Spider, a Porsche 959 and a Lotus 23 B.

The Crosspoint also hosts the valley station of the Kirchenkar, a cable car at the forefront with booths for 10 people that give access to the ski resort of Obergurgl, one of Austria’s most renowned winter sports destinations.

Top Mountain Cross Point fascinates visitors with its contemporary design, created by Tyrolean architect Michael Brötz that has structured the building in dialogue with the sweetness of the surrounding landscape: “I thought undulating snow frames that surround this place. I wanted to integrate the building into the landscape. Also for this reason the choice of natural materials was crucial, “the entire façade is built of wood. “Everything under one roof” is the slogan of this multifaceted edifice. “