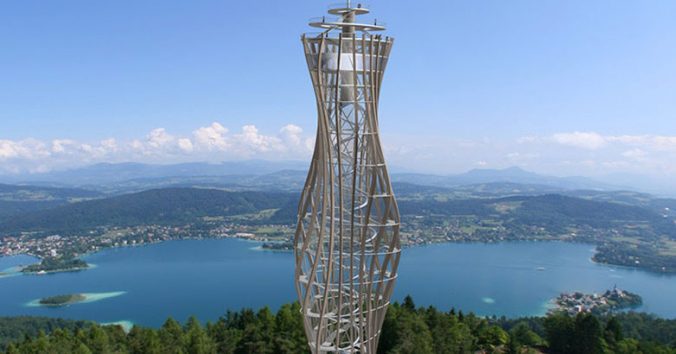 The new panoramic ”Pyramidenkogel” tower in the town of Keutschach am See in Carinthia, Austria, is the world’s tallest observation tower built of wood.
This tower will become a new and positive symbol of development and of building innovation using local timber and will help to renew and revive the image of this tourist destination.

The wooden tower has a height of almost a hundred metres, and was designed by Architects Klaura, Kaden + Partners in Klagenfurt. The structure has an elliptical layout with sixteen powerful columns forming a basket structure that spirals into the sky above the landscape as an immense and spectacular piece of sculpture.

The structure has ten levels spaced at 6.4 metres, and two observation platforms of height 3.2 metres each, with a 360° view. The structure is supported by sixteen glulam columns reinforced by ten elliptical rings and eighty diagonal struts. At a height of sixty metres there is a windowed “Skybox” for visitors, offering an all-round view, which can be reached either by lift or via the stairs. The “Skybox” can also be used for temporary events and happenings. Visitors can then go down the same way… or use the spectacular slide that from a height of fifty metres will take them directly back to ground level: the longest slide in Europe.

Rubner Holzbau in Ober-Grafendorf is producing the materials needed for the structure: 500 m³ of glulam timber, 1.000 square metres of cross-laminated timber and (in collaboration with the Zeman Company) 300 tons of steel, and will deliver all components to site according to the “just in time” schedule. The structure will be erected by Rubner personnel and this will be done very quickly thanks to the high level of prefabrication by Rubner Holzbau, thus completing the project in a short time (with the financial benefits that speedy delivery offers), optimising the amount of work being done at any time during construction and allowing coordination of all operations. Work began in February 2013 and is on track for the opening ceremony in June this year.