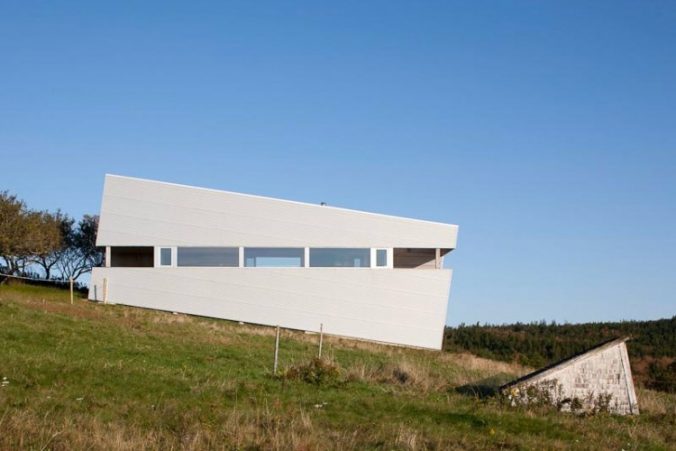 In Canada, Upper Kingsburg, in an old village near Halifax, the Sliding House is a vacation home designed as an elementary box, carved and hollowed by incisions that alter its symmetry, with effects of instability and false dynamism. A construction related to the barns of this segment of Canadian coast, a structure that seems to slide toward the sea while, at the same time, penetrating the terrain, expressing a sense of belonging to the primitive landscape of Nova Scotia. The house rests on the ground like a ship on the sea, a bit sunken, a bit suspended, as if waiting for another wave to push it toward the sea that is waiting there, less than 500 meters away. The house is about to set sail: the line of the roof runs parallel to the slope of the land, and the visual effect is that the house seems to be sliding toward the ocean. The slope of the roof underlines that of the hill, which is actually just 6 degrees. Proudly facing the sea, the western facade of the house has an ambiguous expression, like a face in a curious asymmetrical sneer.

The horizontal eye above it is a simple loggia, with a nautical look, entirely in wood, like all the interiors of the house. “Louis Kahn”, Brian MacKay-Lyons reminds us, “thought a building should not have more than two materials, of which one would be glass”, and this superb house has been conceived in that spirit of simplicity that is so deeply rooted in American modernism; a spirit found in the architecture of Kahn, but also the art of Sol LeWitt and the music of John Cage, who were both students at the Nova Scotia College of Art and Design University. The Sliding House is an elementary monument, a construction related to the rural edifices of the zone. It is the result of an encounter between David Peters and Rhonda Rubinstein, a creative couple with a young son, Dashel, and Brian MacKay-Lyons, a talented architect and part of a family with centuries-old roots in the Halifax region. Seven years ago the couple decided to build a summer home in Canada, and Peters turned to Brian MacKay-Lyons, whom he had known for thirty years and for whom he worked as a graphic artist and website designer. David and Rhonda purchased a lot from the architect in Upper Kingsburg, an old village (founded in 1750) near Halifax, where MacKay-Lyons owns about 20 hectares of land on which he has built 12 houses over the course of 25 years. The couple wanted a quick and relatively economical project, for a vacation home of about 150 sq meters, and MacKay- Lyons, with partner Talbot Sweetapple, imagined a parallelepiped cut and hollowed by incisions that alter its symmetry and generate an effect of instability, suggesting false movement. On the northern side the house protects itself from the cold wind with its thickness, a large air chamber containing the staircase, the bathrooms and the kitchen with fireplace. On the opposite side, to the south, a ribbon window opens to the sunlight and the view of the meadows and the ocean, in a sheltered, welcoming summer habitat, a panoramic promenade that terminates, on both the short sides, in loggias facing the landscape.

The south side of the house

The structure is in wood, the external walls entirely covered with a continuous skin of corrugated sheet metal, a cold industrial material that forms a contrast with the warm poplar interiors.

Exterior and interior design of the house

The hundreds of slats of poplar, with tones varying from red to blanched, generate an intense pattern with optical effects in the hypnotic uniformity of the floors, walls and ceilings.