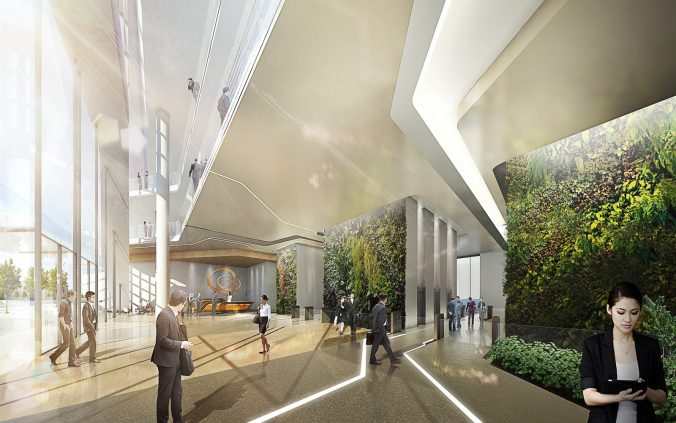 The project of UNStudio has been selected as the winning proposal in the competition for the renovation of the headquarter Hanwha in Seoul: for the Office Tower is scheduled the renovation of the façade together with the review of the interior spaces and the redrawing of the scope surrounding landscape.

Located in the area of Cheonggyecheon in Seoul, the Tower of 57696 square meters has been designed in partnership with Loos Van Vliet, paints the landscape, and Arup, as a consultant for sustainability and implementation of the façade. Also following the selection of the project study agLicht www.Zumtobel.com/Linaria participated in the consultation for the Interior, landscape and lighting of the façade.

The company owns the skyscraper has expressly asked for a new and innovative aspect that would enhance the building and defining characteristic of the context.

UNStudio's idea was to create a system of interaction between inside and outside by means of a dynamic façade, which serve simultaneously as aesthetic artifice and sustainable tool.

The concept provides a facade animated by lighting effects that match the media images of the other buildings on Hanbit Avenue.

The facade is lit by single Led pixel, with lights that reflect different parts of the building, highlighting areas of activity within it. Images on façades, referring to natural phenomena and energy, are designed as part of the branding strategy of Hanwha, a leading provider of environmental technologies in the world. Passing vehicles and pedestrians the LEDs are arranged according to new shapes, creating an ever-changing schedule, nearly predominance the imposing mass of the skyscraper.

In response to the request to integrate environmental architecture competition, UNStudio has developed the sustainable façade reactive: its renewal will result in the replacement of opaque panels with transparent glass, isolated, and aluminium structures that will frame the exterior views. The geometry of the shots is further defined by Sun factors and guidance, in order to ensure reduced energy consumption and participate in the preservation of environmental comfort inside.

Solar impact on the building decreased shading provided by tilting the glass relative to the direction of direct sunlight: only the upper part of the South façade is angled to receive direct sunlight and photovoltaic cells are placed on opaque panels in the South/South-East, where it is used an optimal amount of sunlight.

Inside the Hanwha HQ the natural element dominates with large green spaces and furnishings, and two corner cafes to entice users to enter. The lobby of the venue Hanwha connects the Interior with landscape that continues inward and acts as a key driver in building, while natural materials and plants create a relaxing space for visitors which facilitates the possibility of interaction and social exchange.