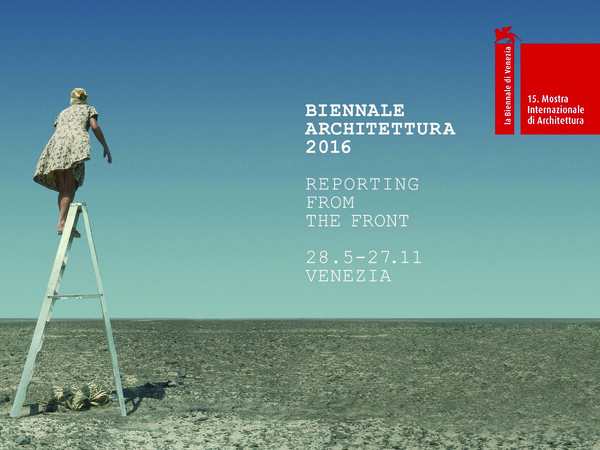 2016 Architecture Biennale will open its doors Saturday, May 28 until Sunday 27 November 2016

Location – Giardini and Arsenale, 15° view international architecture exhibition entitled REPORTING FROM the front, will be directed by Alejandro Aravena and organized by La Biennale di Venezia presided by Paolo Baratta.
63 national participations in the pavilions also will be on display at the Giardini, Arsenale and historians in the historical city center of Venice. Four countries will participate for the first time: the Philippines, Nigeria, Seychelles and Yemen.

“The Lady on the stairs that climb on the highest steps may look at a much wider horizon, and in doing so wins a“ expanded “, proclaims the architecture Biennale 2016. We immediately liked this picture – said President Paolo Baratta – because in a sense represents the Biennale as a whole, with our attitudes and our goals.
The Italian Pavilion at the Tese delle Vergini in the Arsenale, sponsored and promoted by the Italian Ministry of cultural heritage and tourism, General Directorate of contemporary art and architecture and urban suburbs, was awarded the curatorial team tamassociati: Chris Lam, Raul Pacheco, and Simon Sai.

“What is Mrs. see? I think-said Baratta – mainly composed of vast expanses of human settlements which no human could be proud.

Much of this is tragic, is very trivial, and appears to mark the end of architecture. But he also sees signs of creativity and hope, and she sees them in the here-and–now, not in some uncertain aspirational, future ideological “.
“Is this a sign of optimism? We have often deplored, past Biennials – that our present time seems to be characterized by a growing disconnect between architecture and civil society. Previous shows have addressed this in different ways. This time, we want to investigate more explicitly if and where there are trends that go in the opposite direction, toward the renewal; We are trying out encouraging messages. “
“We need to get in touch with the public and with all possible stakeholders in decisions and actions that are created are our living spaces, both as individuals and as a community. How architecture is the most political of all arts.
All breakouts:
Sito ufficiale della – Architecture Biennale 2016: www.labiennale.org
hashtag ufficiale: # BiennaleArchitettura2016
Architecture Biennale 2016

A coral reef of a Spanish bakery

Spanish Bakery is a new proposal of ratail shop, extraordinary idea. Pink as the icing of the cake, candy…