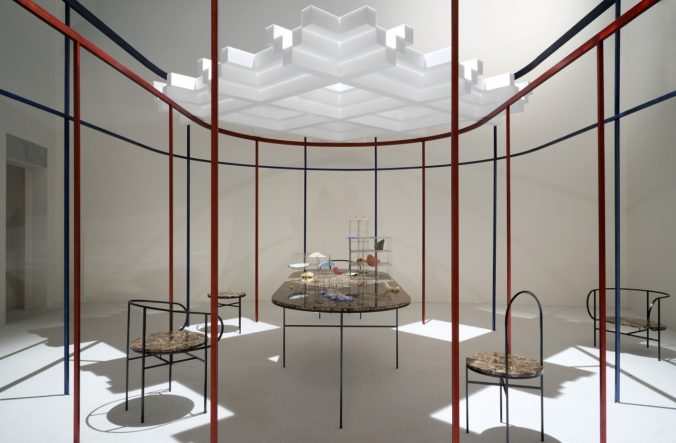 The origins of living, with its suggestions and contradictions.

To narrate this there is Francesco Librizzi which has set to the XXI Triennial of Milan the first room of the man: the D1. An interpretation of the space that, within “Rooms. Other philosophies of living “, edited by Beppe Finessi, recounts the discovery of the domestic and the revelation of the line that divides it from nature, beyond which the space is no longer wild.

An existential center to which to converge our existence that is expressed visually in a empty environment in the center that acts as a fulcrum for a series of satellite spaces which will orbit around.
The D1 installation consists of three concentric enclosures formed by thin colored metal columns which suspend at different heights a continuous line of trabeation.

Made by De Castelli with absolute precision, the section of the metal elements varies depending on the height from the ground of the trabeation same, from a minimum of 25×25 mm up to a maximum of 25×70 mm.
The first enclosure is blue and separates from outer external space; the second, red, is the gap that identifies and contains the internal space while the third is the perimeter of a table that determines the transition from a space of men to one populated by objects.
D1 is the celebration of the threshold. For this the room highlights the role of architecture in the mediation between landscape, domestic space and objects.

The table tells the need for the man to assign limits and does so by hosting micro architectures celebrating the value of the items chosen for define the lives and the human need to give relief to people.
On it hangs an artificial architectural sky that through once it casts attention on the interior space and the field in which they orbit the furnishings made by Emmemobili, consisting of brass elements cut by water, silver assembled and welded to form continuous frames with reticular structure.
To express the human desire to stay in a particular place are the chairs, different from each other to tell the many facets of the time that you live in the domestic space.
Made by Zanotta, they born in continuity with two traditions: on one side shooting the image of Vienna chairs, on the other the refer is to the interpretation of modern seating tubular steel exploiting the elastic properties of the metal. The frames are made of extruded steel profile with a square section full of 12 mm.
D1 is therefore an infinite journey, from which you generate a multiplicity of possible spaces, open until September 12, 2016.

A coral reef of a Spanish bakery

Spanish Bakery is a new proposal of ratail shop, extraordinary idea. Pink as the icing of the cake, candy…