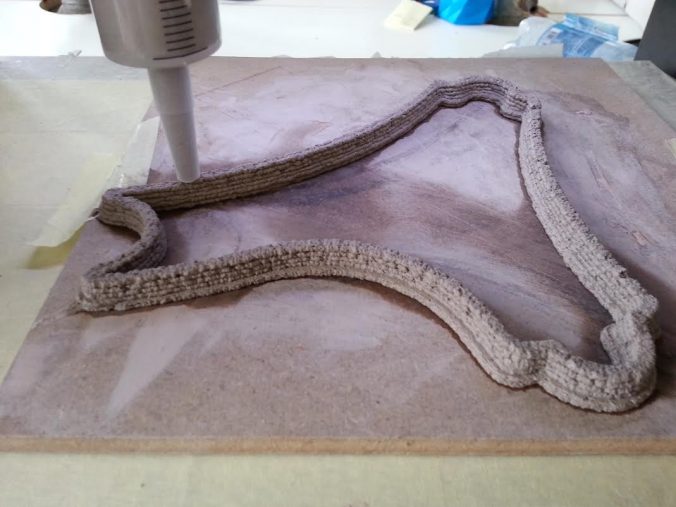 With the influx of new 3D printers hitting the market at ever increasing rates, it won’t be long before more and more companies begin to focus not on the hardware itself, but rather on material engineering and development. Currently we are still limited by technology, preventing us form 3D printing in materials that we would prefer.
For example, current consumer level 3D printers allow us several plastic options, and a very few nylon-like choices, but most 3D printers today pretty much stop there.

It’s only a matter of time before we will be able to create objects to our liking in metals, rubbers, ceramics, and woods, but that time has not come quite yet.

An Italian designer and engineer, named Francesco Pacelli, hopes to help with the advancement of 3D printable materials. After graduating from The Polytechnic University of Milan, a school that specializes in product design and material engineering, he set out with one of his professors (Marinella Levi) to open a lab within the university. In this lab, researchers can conduct academic research on 3D printing, by combining their design and engineering backgrounds.

Pacelli has had an interest in 3D printing, thus the idea of working on generating materials for the process was one in which he caught onto quite well.

“I think it’s a very interesting material to work on (3D printable materials), since low-cost 3D printers could become a very useful tool for craftman to realize complex shapes without molds,” Pacelli told 3DPrint.com. “During [these past] weeks I [discovered] a project for a contest called ‘Ceramic Futures’ in collaboration with 3 other European design schools, Confindustria Ceramica (an important Italian ceramics association) and Cersaie, a fair that will be held in Bologna on September 2014 where all the projects will be shown.”

Surprisingly, by mixing the ground coffee beans with the clay, he got a material that could be printed with much more ease than just the clay by itself. “I obtained a more precise deposition with coffee/clay material than with simple clay, since coffee makes the material less gluey and sequential layers are less influenced by the nozzle’s passage,” Pacelli told us. “I think this is related to the atomic packing of coffee powder grains when passing through the 4mm nozzle, but I can’t say it for sure, I need to investigate on that a bit more.”

Pacelli has experimented and has been successful in printing using both a mixture including red clay, as well as white clay.  Here is the printer in action, printing using Pacelli’s coffee/clay material.

Once the 3D coffee/clay printed object is complete, it must be fired in a kiln at at over 1000°C, in order to dry and harden the material. At these extra high temperatures, the organic components (in this case coffee) burns off. This leaves a final fired material that is extremely light and porous, when compared with traditional ceramics. “This could be very interesting for some applications where you need lightness and thermal resistance,” Pacelli explained.

Pacelli plans to continue working on his material engineering, to see what else he can come up with. It’s projects like these that will ultimately lead to 3D printing being adopted at greater rates. People want to have the ability to print objects out of materials that make them the most usable, so the more new 3D printable materials that come about, the better.