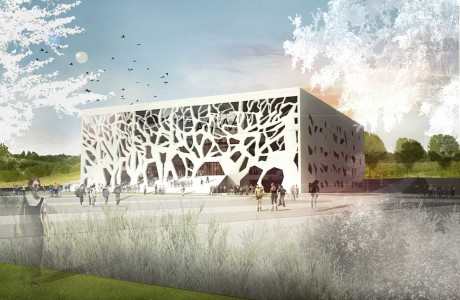 ANIMA is the first work of the Swiss architect Bernard Tschumi (among his most famous works there is the Parc de la Villette in Paris) in Italy. Commissioned by the Fondazione Cassa di Risparmio di Ascoli Piceno and Comune di Grottammare, the work was born with the objective of facilitating the identification of the territory.

The project, whose inauguration is scheduled for 2016, is a future landmark for the city of Grottammare, a generator of ideas for the territory, both in its physical size and in its creative potential. Including in an area at the edge of the urban fabric between the sea and the hills, the new work is characterized by a high degree of flexibility; its spaces are configurable on event function.

The name, ANIMA, comes from an acronym: A as Art, N as Nature, I like Ideas, M as Music, A like Action. They are the “five souls” of the project the architect has interpreted as an identity in the making. The work will be a catalyst for interest, interactions, synergies.

The surface where architecture is placed coincides with that of the small medieval town of Grottammare, slightly more than 7,000 square meters. The project approaches the historical heart of the town not only in size: it recalls, both outside and inside, the “urbs” concept. Outside the ANIMA looks like a compact body, a perfect square that, if somewhat alludes to an idea of closure and protection, it breaks and immediately shows a high permeability.

A reflection on the theme of the façade is the basis of the research that led Bernard Tschumi in a workaround for large vertical walls that surround the building and that finds its strongest expression in the south wall, through which you access the complex. Once in the square body you find yourself immersed in a split, partly inside and partly outside.

The architect explains the project:

The complexity of this space is determined by the rotation of a large cuboid volume that occupies the central area of the building and contains the main hall, with seating for 1,500, flexible and configurable based on capacity needs variables.

The rotation of this volume determines a system of four large courtyards, to each of which the main hall has a chance to open up a fluid and dynamic system of visual and physical paths. In addition, an extensive system of ramps allows moving within this heterogeneous environment and mobile, observing from prospects and continuously variable heights. Adjacent to the main hall and linked spectacularly through a multiplicity of paths, there are willing share laboratories, offices, café-restaurant, ancillary spaces.

Can you design a façade without recourse to a formal composition? Can you do so is neither figurative nor abstract but, so to speak, without form? At a time of economic crisis, indulge in formal geometry produced by complex volumetric curves didn’t seem to be a responsible choice. The era of the so-called ‘iconismo’ seems to be finished, as arbitrary sculptural figures of the recent past “.

“Rather than adding a new province and iconic sculptural shape, we decided to investigate interaction, simplicity and sobriety. The internal organization of space was socially and culturally important, but that the external image of the project was equally significant. For this reason we have designed a simple square plan with four façades and a fifth façade, as equivalent coverage. Each façade has its own vocabulary, allowing to address issues such as protection from the Sun, natural lighting and ventilation at the same time project a strong identity to the outside world.