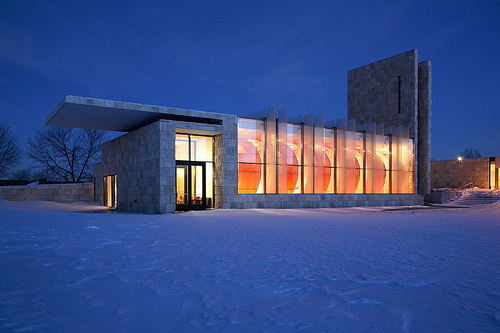 HGA Architects and Engineers, Inc., of Minneapolis, was selected in 2001 as the architecture and engineering firm for one-story chapel, the Bigelow Chapel, comprises a processional corridor, a chapel with seating for up to 200, a bell tower and support spaces. Although the project was not delivered via the design/build method, M.A. Mortenson, also of Minneapolis, was chosen as the general contractor early in the design process and provided constructability, cost estimating, and general construction services.
The architectural plan was devised to effect a luminous structure of curving panels, column-free spaces, and slender, floating forms. This chapel’s exterior is designed to complement the existing architecture rather than strike a counterpoint to it. One of the most arresting features is a series of translucent glass planes, or “fins,” < that were inspired by the vertical lines of surrounding buildings. These fins add a distinctive note to the worship space. The bell tower provides a primary focal point for visitors approaching the building from the main entrance; at the other end there is a corridor, affording a quiet transitional space between the central garden and the chapel. At the south end, the chapel is connected to a corridor within an existing classroom building.

However, the chapel has its own main and secondary entrances. The main entrance, at the south, leads to a long processional corridor that unites the secondary entrance with the chapel. The secondary entrance, on the west side, leads to a central garden space that provides access to a meditation garden located between the chapel and the support facilities. Completed in August 2004, the 5,300 sq ft (492 m2) chapel complex cost slightly less than $3 million to construct. The site lend itself to the use of shallow spread footings to support the single-story building. A basement was not required, and the floor takes the form of a grade-supported concrete slab. Most of the ductwork used for heating, ventilating, and air-conditioning was buried below the slab. Not only this required careful coordination of footing elevations but also careful measurements, ensuring that foundation pressures were not exerted on the buried ductwork. Moreover, a large “area well” to house a unit for air exchange was required.

The structural design and the determination of the required live loads, snow loads, and lateral wind loads were in accordance with criteria specified in Minnesota’s building code. To determine the stability and resistance to lateral winds, an analysis that includes the deflected shape of the structure under load to determine the final stress, was performed. The design focused on incorporating three key qualities, intimacy, warmth, and light. To create this, the architects desired a large column-free space, a ceiling of skylights underlay with curving panels which wood veneers would cast a warm glow throughout the chapel, and a glass curtain wall. By visually diminishing the length of the wall, the fins help to establish a more intimate space. Although much of what was originally specified was not structurally possibly, the engineers working on the project were able to elevate, rather than compromise, the architects’ vision.