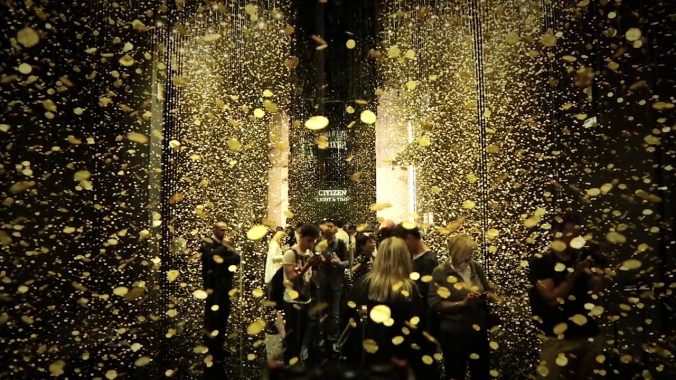 2016 CITIZEN participate in the Milan Design Week, one of the biggest events in the world dedicated to design. Tireless Explorer of the relationship between “light” and “time”, CITIZEN has been one of the protagonists of the Salone del Mobile 2014 thanks to a setup that has attracted and excited thousands of people, creating a viral phenomenon among insiders and not.

A successful debut for CITIZEN, which in 2014 was participating for the first time at world appointment with design with a collaborative effort between the creativity of the architect Tsuyoshi Tane of DGT Architects, architectural firm of international renown, and the Design Team of the company.

The whole essence of CITIZEN watches was on display in a spectacular space made of light and time. Inside de La Triennale di Milano has taken shape “LIGHT is TIME“, an art installation composed of 80.000 platine floating suspended in vacuum by creating a magical and extraordinary.

After the success of Milan, the installation was awarded in two different categories at the Milan Design Award 2014 and the Gold at the London International Awards (LIA) in 2015. Was again a protagonist in 2014 to Aoyama Spiral Building in Tokyo, an event that attracted more than 70000 visitors.

The return of CITIZEN at the Milan Design Week will be an opportunity to continue exploring the intense relationship between light and time through a journey into the world of the clock, which was born from the desire of the company to share with a wider audience the very soul of the brand: not only create watches best, but open doors new watchmaking industry.

Since its founding in 1918, CITIZEN had an approach geared towards the future, motivated by a desire to overcome the boundaries of watchmaking to provide increasingly better products. The 1976 is a crucial year for the company, because it represents the birth date of a decisive technological innovation: developing your first light powered watch. This technology from CITIZEN EcoDrive, hereinafter referred to as the watch to mark the exact time using any light source to generate power themselves. Ecodrive has so completely eliminated the need to replace batteries and made accessible to everyone the pleasure of wearing watches, one of the essential features of the company. With the statement “Better Starts Now” (it is possible to improve, now) and on the strength of its role as a pioneer of technology at light loads, CITIZEN continues to make progress and improve the scope of ecological watches: an improvement process intended not to stop.

This website uses cookies to improve your experience while you navigate through the website. Out of these, the cookies that are categorized as necessary are stored on your browser as they are essential for the working of basic functionalities of the website. We also use third-party cookies that help us analyze and understand how you use this website. These cookies will be stored in your browser only with your consent. You also have the option to opt-out of these cookies. But opting out of some of these cookies may affect your browsing experience.
Necessary Always Enabled

Any cookies that may not be particularly necessary for the website to function and is used specifically to collect user personal data via analytics, ads, other embedded contents are termed as non-necessary cookies. It is mandatory to procure user consent prior to running these cookies on your website.