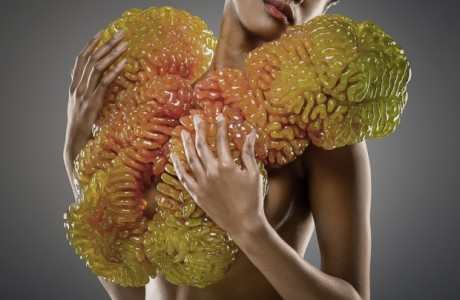 Neri Oxman is an Israeli designer known for her avant-garde works, which made her get a professorship at MIT (Massachusetts Institute of Technology) in Boston. Her last project of is a collection of micro-dresses: they are inspired from the four elements (earth, water, air and fire) and named as the planets of the solar system.

Each one is designed to chemically react to specific environments: photosynthesis to convert light into energy, biomineralisation aimed at human bones, or fluorescence to illuminate the streets. Everything is designed to transform the elements in necessary things for life, in a quest that combines 3D printing (in this case of different materials) and synthetic biology.

Jupiter – a single thread that is inspired from both the form and the function of the human gastrointestinal tract. This dress was designed as a real organic system to consume and digest biomass, to absorb nutrients and to excrete waste.

Saturn – is covered with a thick hairy texture to fight against the wind.

Mercury-extensions that rise from the shoulder blades to protect the head. The moulded frame is designed to contain bacteria for calcification with the aim to grow true bones as a protective exoskeleton.

And then there is also Moon: thanks to a wearable pneumatic surface, it generates oxygen. Inside pockets with spherical shape, there are algae, which are useful for the air purification and for the collection of biofuels.