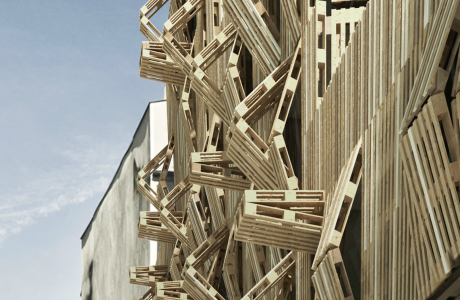 Design a façade with a strong aesthetic appeal and the minimum environmental impact: these are project guidelines developed on the façade of a building in Rue Amelot, Paris, which was signed by Stéphane Malka.

This work takes away from French regulations HQE (Haute Qualité Environnementale), a set of parameters that – taking into account all stages of construction (and recovery) of a building – assesses the actual consumption and the impact on the environment. This project seeks to integrate into the urban context differently, precisely because of the excessive use of polluting materials and excessive energy consumption of design practices.

It is a restoration completed without any demolition. Thus, no new construction and no demolition. The architect has enhanced the building by acting on the main façade, facing the urban fabric, working with wooden pallets, then choosing natural materials.

Production costs remained modest, because the different modularity and games of volumes and recess was achieved by simply working on pallets, arranged to create this movement and held together by hinges. The French architect’s approach is new: the choice not to destroy anything and to make operation overlap the built, without touching the ground.

French architect and artist challenges those who see the architecture and the urban fabric of Paris as untouchable. He plays with the forms and perspectives, speaking in an almost revolutionary way in the city. The E7, in Paris, is designed by him. He loves poor materials, such as wood, pallets, cardboard.

“I mainly work with existing buildings. I try not to destroy them, but work on them, on the façade, exterior, so to change them and transform them. I exploit materials that already exist, in order to give them a new life with a new use.

I got the ready-made idea by Marcel Duchamp: take an object and make it self-sufficient. I tried to use the same strategy as in architecture, turning a building using cardboard boxes, pallets, sneakers or tubes. It’s a way to take mass consumerism as a new source of inspiration, not only because of the crisis, but also because we need to give all objects a new lease of life”.