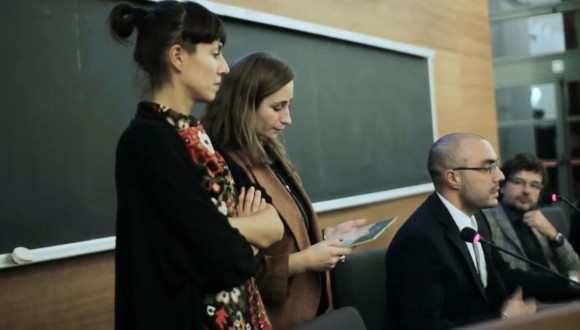 “Light as an element of connection between past, present and future”: perhaps one of the most fascinating definitions ever given to this physical phenomenon that for centuries has been the subject of studies by men. It was given to AIDI (Italian lighting Association) that launched in May this year, along with APIL and PLDA, the international competition “Urban Lightscape”.

The requests were very clear but not easy: the winning design was required to embrace both the public as well as the artistic and environmental of the Eur should be able to make available the historical soul of this area of the capital in balance between ancient and modern. The Eur is certainly not an area that goes unnoticed because it is characterized by both from an architectural point of view that urban planning. And for this reason lighting design had to be careful and built ad hoc to be akin to the urban dimension so strong. Naturally then, the spotlight was focused on the use of smart technologies, designed to make the sustainable neighbourhood energy-environmental point of view, both functionally, assuring quality of urban services responsive to user requests.

The light thus seen as magic wand, as a tool that can serve as the glue between the history, culture, structure and function of an urban area. This is inevitable to recognise the unique ability to transform (ideally for the better, sometimes for worse) the perception of a place.

To get better the winning project “Genius Luci” thought by Helena Gentili, young architect lighting designer freelance, along with Daria Casciani (Politecnico di Milano, Department of Design. Light lab) and Charles Davis (Davis & Santoro), we decided to let us tell from his creator.

To imagine the right light in a place, how important is it for you having studied urban planning?  Town planning is the discipline that has as its purpose the design and development of the territory and has been instrumental in having studied urban planning and development topics for the professional activity that today I am in lighting, in particular for urban lighting. We know that artificial light is an element capable of changing the perception and the meaning of a given location or architecture, then a factor of great importance for the construction of the night scenery going planned and designed with care.

What lies behind the name you have chosen for your project? The project name is originated the concept of the ‘ Genius loci ‘ much discussed in architecture which denotes the essence of a place. Why ‘ Genius ‘ represents the specific approach between the light and the historical/cultural context of EUR adopted by the Working Party in order to enhance and emphasize its identity. The project stems from a deep exploration: the analytical phase that has investigated the space, social relationships, the urban functions and the architectural context of this particular neighborhood, in order to identify opportunities for lighting design in relation to specific local needs.

What did you get inspired for this project: they wrote that is like a “museo sperimentale”, do you agree? The area has been designed as a great “Museum” experimental linking, through light and bright experience the different architectural styles, emphasizing the beauty of public places and improving the livability of green areas of aggregation. They also proposed specific lighting solutions for each function and characteristic urban and system have been developed through intelligent management infrastructure. The proposal of EUR is intended also as a research project carried out for the “city within a city” that functions as a laboratory of urban lighting (Living Lighting Laboratory) in which test new technologies with a gradual approach and through a public-private partnership investment.

You have a special relationship with Rome, as it was to imagine a lighting design right there? Almost ten years ago, I arrived from Brazil to Rome to specialize on the issue of artificial light and it was there the starting point for my career, so design for the EUR has also been an invitation to rediscover the spaces and memories experienced in the city. Winning an international competition in the city of my ancestors and my first home in Italy, it was exciting, almost like a conclusion of a route, not always easy to see the distances and difficulties to overcome. The prize for me was how the recognition of a job done with passion and commitment by all members of the group.